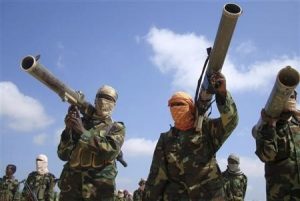 Kenyan police said there are rising numbers of Islamist fighters gathering on the country’s border with war-torn Somalia and some are planning attacks during the Muslim holy month of Ramadan, like reported by bloomberg.com.

Some of the militants belonging to the al-Shabaab group have tried to cross into the northeastern Kenyan counties of Wajir, Mandera and Garissa, the National Police Service said Wednesday on Twitter. One group has been hiding in Somalia’s mountainous Gedo region and may be planning attacks on the Kenyan side, it said.
Al-Shabaab, an affiliate of al-Qaeda, has staged attacks that have killed more than 200 people in Kenya since the East African nation sent troops into Somalia in 2011 to prop up the government. Al-Shabaab has waged a more than decade-long insurgency in a bid to impose its version of Islamic law in Somalia.