You are here: Home / Africa / Islamist Al-Shabaab fighters take control of Kenyan military base in Somalia 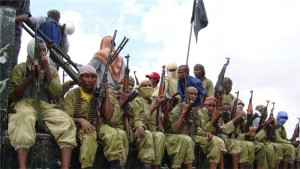 The Somalia-based militant group Al-Shabaab has taken control of a military camp manned by Kenyan soldiers who are part of the African Union Mission in Somalia (AMISOM) following heavy fighting early Friday, like reported by xinhuanet.com.

Residents in the remote town of Kulbiyow said many casualties are feared after heavy explosions and gunfire broke out between the military and the insurgents.

“Heavily armed Al-Shabaab fighters attacked the military base in Kulbiyow early Friday. Heavy explosions and gunfire could be heard from the base,” a resident told Xinhua.

Both Kenyan and Somalian military officials have not confirmed the number of casualties yet, but residents said the attack was deadly. Some residents said some Kenya Defense Forces (KDF) soldiers had crossed into Kenya.

The residents said the militants were seen moving weapons and military vehicles out of the devastated KDF base in Kulbiyow town.

Reports say several dead bodies in KDF uniforms could be seen at the scene in Kulbiyow town.

The KDF said it sent reinforcement which was able to destroy two vehicles loaded with improvised explosive devices within the vicinity of their Forward Operating Base (FOB) at Kulbiyow, an area near Kenya’s border with Somalia.

The terrorist attack came a year after the Al-Qaida allied terrorist group killed an unknown number of Kenyan soldiers at a KDF base at Elade in the Gedo region.

Al-Shabaab later claimed responsibility for the Jan. 15, 2016 attack saying it had taken over the base and killed more than 63 KDF soldiers. Kenya has not released the number of casualties.

Al-Shabaab has vowed reprisal attacks in the country, mainly targeting security forces in border towns of northern Kenya, where dozens of people have been killed in landmine and grenade attacks blamed on the militant group.

The group, which has teamed up with the global terror network Al-Qaida and Islamic State or ISIS, has vowed an all-out war in Kenya, in retaliation against what it called a military incursion “against our brothers in Somalia.”