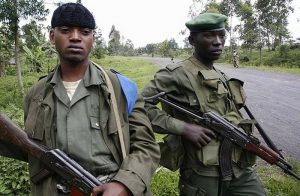 Allied Democratic Forces (ADF) militia fighters have killed 23 people in yet another massacre in the eastern Democratic Republic of the Congo (DRC), a senior local official has said.

The death toll was still provisional as the search for bodies continued, the governor’s office said on Twitter on Wednesday.

“We are in mourning, the ADF carried out a raid and killed more than 20 people,” said Noella Katongerwaki Muliwavyo, president of an association of grassroots groups in Beni.

Beu Manyama-Moliso is a small village located in remote forests in the Beni region, close to the boundary with Ituri province.

The ADF, which originated in the 1990s in western Uganda with the aim of establishing an Islamic state, is one of more than 100 rebel groups that plague the eastern provinces of the vast country.

About a year ago, the Congolese army launched a large-scale campaign against the ADF.

The ADF is linked to the ISIL (ISIS) group, the United States said earlier this month. United Nations experts, however, have not found evidence of any direct relationship between the two groups.

According to the Kivu Security Tracker, an NGO that monitors violence in the DRC’s troubled east, the group has killed more than 1,200 civilians in the Beni area alone since 2017.

On March 19, the UN said a surge of ADF attacks since the start of the year had killed nearly 200 people and forced 40,000 to flee their homes.

At least 17 were killed in separate attacks on March 23.

Last year, the UN said the group’s attacks could constitute crimes against humanity and war crimes.

The ADF makes money through wood trafficking and DRC officials suspect some military personnel are complicit in its violent raids.