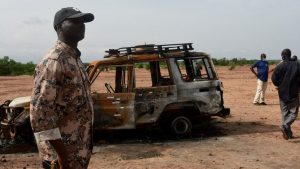 Islamic terrorists killed 15 soldiers and wounded four more on Tuesday in an attack on an army post in southwest Niger, the ministry of defence said on Wednesday.

The attack in north Tillabery region, which borders Mali and Burkina Faso, came two days after gunmen killed 16 soldiers in the nearby Tahoua region of the West African country.

The soldiers were part of a special anti-jihadist force called Operation Almahaou, said Niger’s defence minister in a statement. They were attacked on Tuesday afternoon by heavily armed men on motorcycles, whom he described as “terrorists”.

Several of the assailants were also killed in combat, while others retreated toward the north and are being pursued, said the statement.

The area is overrun by jihadist groups with links to al Qaeda and Islamic State, who have killed hundreds of soldiers and civilians since 2018 when they began broadening their reach beyond bases in Mali.

The scale of the violence this year has called into question claims of progress in the fight against Islamist militants by governments in West Africa’s Sahel region and former colonial power France, which has 5,000 troops there to support them.