You are here: Home / Senza categoria / Islamic terrorists involved in attacks across the globe have used Bitcoin to fund their attacks 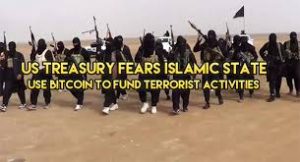 Islamic State and other jihadists’ use of the digital currency Bitcoin is a trend that “has been growing and taking shape” in recent months, “and now holds a prominent presence online”, like reported by jpost.com.

This is the conclusion of a report obtained exclusively by The Jerusalem Post. The report was issued by the IDC Herzliya International Institute for Counter-Terrorism’s (ICT) cyber desk, with input from ICT deputy director Dr. Eitan Azani and cyber-desk coordinator Nadine Liv.

Some of the ongoing ISIS and jihadist use of Bitcoin discussed in the report include fund-raising websites’ efforts to stay afloat after the fall of Raqqa in October 2017; terrorist fund-raising in Gaza; a recently busted money-laundering operation in the US; and examples where Bitcoin was used to fund infamous terrorist attacks.

The report starts by recounting that in the summer of 2014, an important article titled “Bitcoin wa Sadaqat al-Jihad” was published in an online blog. The article set forth the various strategic reasons for jihadists to use Bitcoin.

The article “promotes the use of Bitcoin virtual currency as a means of limiting economic support for infidels and circumventing the Western banking system, which limits donations for jihad through restrictions on the financial system.”

It recommends using Bitcoin, “for ideological-religious reasons as well as for its technological characteristics, and insists on the advantages of the system that enables the issuing of this currency.”

It further says the cryptocurrency’s advantages include: “prevention of counterfeiting; it is anonymous and untraceable; it is not subject to legislation; and it has global distribution.”

Jihadists like Bitcoin because through its use they can avoid paying taxes to Western and other non-jihadist governments and avoid legal exposure.

The ICT report notes that Bitcoin is transferred from one user to another “without systemic intercession, such as eBay or PayPal, while relying on a decentralized system; it does not have security weaknesses and cannot be hacked.”

Jumping forward, the report discusses the Akhbar al-Muslimin website, which publishes news from Islamic State. Analysts were asking if ISIS would survive the October 2017 fall of Raqqa; by November 2017, the ISIS propaganda site had launched an online fund-raising campaign.

The site’s operators “attached a link to each published news report encouraging donations using Bitcoin virtual currency for the purpose of operating the site.”

In December, the Meir Amit Intelligence and Terrorism Information Center found that clicking on the link led to a dedicated donations page on a Bitcoin trading site called CoinGate. When ICT independently examined the issue on January 16, it found that the link no longer directs to CoinGate, showing how quickly ISIS’s online arms adapt to avoid being tracked.

ISIS-affiliated groups in Gaza have also increased their online Bitcoin fund-raising efforts, led by the Ibn Taymiyya Media Center which serves as the media wing of the Mujahideen Shura Council in the Environs of Jerusalem.

In mid-January 2018, a new Bitcoin address was identified in a Telegram instant-messaging group affiliated with the ISIS-Gaza group.

The report said that an examination of the address on Blockchain, a digital ledger in which Bitcoin transactions are recorded publicly, revealed a series of 15 transactions from July 1, 2016, to January 12, 2018.

The average Bitcoin transfer through this platform is estimated to be about $16,700, but some account totals reached close to $300,000 in transfers.

In mid-December, Shahnaz was indicted in the Federal District Court of Central Islip, New York, for stealing and laundering more than $85,000 of illegal returns using Bitcoin and other digital currencies.

THE report said the funds were transferred out of the US to shell corporations in Pakistan, China and Turkey on their way to the coffers of ISIS.

Shahnaz was arrested at JFK Airport in New York as he tried to flee the US for Syria.

Work has begun in the US on legislation to grant more resources to Department of Homeland Security to follow terrorist uses of Bitcoin.

The report said that terrorists involved in attacks across the globe, from France to Indonesia, have used Bitcoin to fund their attacks in ways that are harder for law enforcement to track than other forms of funding.