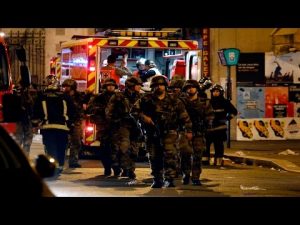 Two years after militants killed 130 people in co-ordinated attacks across Paris, French officials say there remains an unprecedented level of “internal” threat. With Islamic State losing ground in Iraq and Syria, hundreds of French citizens – and in some cases their children – are expected to attempt to return to France, leaving the government in a quandary over how to deal with them, ike reported by irishtimes.com.

For the first time as president, Emmanuel Macron will pay tribute on Monday to the victims of the mass shootings and suicide bombing that took place across Paris and in the city’s northern suburb of Saint-Denis on November 13th, 2015. The attacks, the deadliest on French soil since the second World War, prompted the country to strike back, joining international military operations targeting Islamic State and other Islamist militant groups in Iraq, Syria, Libya and elsewhere.

There has also been the passage of more stringent French legislation, with the most recent law, effective this month, giving police extended powers to search properties, conduct electronic eavesdropping and shut mosques or other locations suspected of preaching hatred. Conservative politicians say the regulations don’t go far enough, while human rights groups express alarm, saying security forces are being given too much freedom to curtail rights.

Macron – often parodied for his “on the one hand, on the other hand” policy pronouncements – has emphasised the need to balance security and liberty. While he has ended the state of emergency brought in after the attacks, heavily armed soldiers still patrol the streets of Paris daily, and barely a week goes by without a police operation to round up suspects.

According to the interior ministry, extraordinary measures have helped intelligence agencies thwart more than 30 attacks in the last two years. Last week, the police arrested nine people and another was apprehended in Switzerland in a co-ordinated counter-terrorism operation.

French prosecutor François Molins has said that while larger cells are still plotting, more attacks are likely to come from isolated individuals using “low-cost” methods such as cars or knives to kill. “We are witnessing a new bout of isolated actions, 11 since the beginning of the year, which supports the idea of an increasing endogenous threat,” he told France Info radio.

Of particular concern is what to do about hundreds of French citizens who went to fight with Islamic State and may now seek to return home, now that the militant group has lost nearly all the territory its self-proclaimed caliphate ruled in Syria and Iraq. Visiting Abu Dhabi last week, Macron said those returning would be studied on “a case-by-case” basis.

“Some of them will be coming back (by their own means), others will be repatriated and some, in specific circumstances, will be facing trial with their families in the countries where they are currently, Iraq in particular,” he said.

Molins said the French secret services estimate that about 690 French nationals are now in Iraq and Syria, including some 295 women. Estimates from late 2015 suggested about 2,000 French citizens had gone to fight with Islamic State.

“A majority doesn’t want to come back to France given the legal proceedings they face upon their return. But some women, widows, with their children, are inclined to travel back,” Molins said.

“We should not be naive. We are dealing with people who are more ‘disappointed’ than ‘sorry’.”