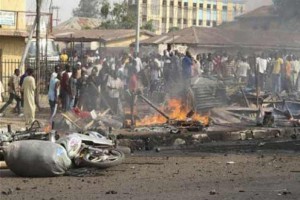 Two terrorist suicidal bomb attacks today in the north of Cameroon caused the death of three people and wounds to six, the Government reported today.

The first of those actions was carried out by a woman, who exploded bombs she had attached to her body, causing wounds to five people in the Far North Region, said Minister of Communications, Issa Tchiroma Bakary.

The other attack was carried out in the northern locality of Waramide, at the border with Nigeria, when an attacker made explode himself with several explosive devices. He died together with a resident in the area and a passer-by.
plenglish.com