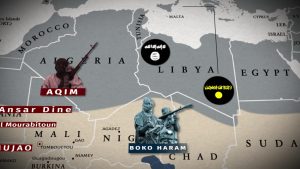 The African region of Sahel might be relatively geographically distant from Europe, but it should be considered integral in security sense for the European Union (EU) given the ever-expanding activities of various jihadist and criminal organizations in that area, like reported by eeradicalization.com. Situated between the Atlantic Ocean and Red Sea and south of the Sahara Desert, the Sahel is being used as a transit hub for the trafficking of illicit goods—and people—to Europe. While factors such as drought, poor harvests, desertification, and state failure have driven many local farmers and herders into illicit trades simply to make a living, those in control are much more nefarious. Huge number of refugees and immigrants use these pre-existing smuggling networks to get to Europe, often through the chaos of Libya, lining the pockets of organized criminal and jihadist groups that control the networks.

According to United Nations (UN) Economic Commission for Africa, the annual revenues from illegal smuggling in the Sahel amount to $50 billion. A report of the Organization for Economic Co-operation and Development (OECD) estimates that 60-70% of the region’s economy is “informal”, i.e. outside of the legal frameworks of the various states. Clear evidence demonstrates the long-lasting cooperation between Latin American drug cartels and local groups in West Africa. At least 50 tons of cocaine per year arrive from South and Central America to be redistributed across the Sahel, travelling north from there to Maghreb and thence to Europe’s streets.

The truth is that the Sahel is closer than it appears and its effects even closer to the EU. The EU might look at the weak and failing states that cannot solve economic crises or their inter-communal and tribal conflicts or mitigate the effects of climate change, and think it has little to do with them. But these maladies are carried by numerous vectors into Europe. The various radical jihadists and the criminal networks not only materially influence European security through illicit activities; they also spread hostile and radical ideologies, contributing to the already high levels of violence and chaos.

The regional crisis was not pacified even after the 2012 French military intervention in Mali and the establishment of an UN peace mission, which was followed by the 2015 Algiers peace accords. The radicals were defeated on the battlefield in many ways, but not completely eliminated, and found enough opportunities to regroup, grow, expand, and attack again. Between 2012 and 2018, 344 civilian and military personal of UN were killed in jihadist assaults. Terrorist and radical influence steadily spilled over from Mali to Burkina Faso, Niger, and Chad, exploiting and exacerbating already existing social, political, and ethnic cleavages. Powerful Al Qaeda and Islamic State (ISIS) affiliates were able to capitalize on the insecurity and social marginalization of entire communities, using their version of religion as an alternative to the failed traditional sources of power. Between 2014 and 2018, the activity of eight jihadist groups was related to the deaths of over 1,100 civilians, including 400 in 2017 alone. According to UN, violence and instability have led to a refugee and humanitarian crisis with more than one million displaced people in Mali, Chad, Mauritania, Burkina Faso, and Niger. At the same time, the World Food Program warns of 2.4 million people in urgent need of humanitarian aid, and more than five million children at risk of malnutrition. Local governments have practically lost control over entire regions. There is real danger that these territories might fall permanently under jihadist influence and from there it can easily spill over to neighbouring Togo, Ghana, and Cote d’Ivoire as well.

All these facts are clearly visible for the European political elite, and the escalating resources Brussels devotes to the area suggests they understand that the Sahel region will become an ever-increasing priority for the EU.

So far, the biggest contributor to regional defense and security has been France, the former colonial power and traditional power-broker in this part of Africa. In the summer of 2014, Operation “Serval” in Mali was succeeded by “Barkhane”, which had a much wider geographical scope. Some 5,100 soldiers have been so far deployed across Mali, Niger, Chad, and Burkina Faso, including 600 sent since the start of this year in the context of increased activity by the jihadist groups. Between 1,500 and 2,000 French soldiers operate in the Northern and Eastern parts of Mali and the rest are spread out between the headquarters in N’Djamena, at least four bases and airfields in Niger, as well as one special forces unit in Burkina Faso (Operation “Sabr”).

The French soldiers engage in wide range of activities from joint patrols with local partners, to intelligence gathering, providing training and in general, any kind of capacity-building support to fill the vacuum of governance left by the absence of state institutions. A special emphasis is placed on conducting counter-terrorist operations that have led to the termination of some high-ranking jihadists, such as Djamel Okacha – one of the leaders in the powerful Al-Qaeda affiliate known as Jama’at Nasr al-Islam wal Muslimiin (Group for the Support of Islam and Muslims). However, these battles come at a great cost. In November 2019, the French army lost thirteen soldiers in an accident involving two helicopters sent as a support during a special forces operation in the isolated border area between Mali, Niger, and Burkina Faso. In total, 41 French soldiers have been killed in the region since the country first intervened in January 2013.

While Paris concentrates on military activities, the EU works on broader issues. In 2011, Brussels presented a comprehensive and multicomponent strategy for the Sahel region. It was upgraded in 2014 and 2015 and now this plan specifically targets Burkina Faso, Mali, Mauritania, Niger, and Chad, and extends into Maghreb countries and Nigeria. In practice, the strategy is based on the classical 3D approach—combining diplomacy, defense, and development. The first component is related to the appointment of an EU Special Representative for Sahel, whose tasks include coordination and mediation between the main stakeholders. The defense and security part of the strategy involve deployment of three missions in Mali and Niger. Their aim is to provide training for the local police and army forces in the context of the battle against terrorism, organized crime and trafficking. However, these missions do not have mandate to participate in military or counter-terrorist operations. In development and economic sense the EU has put in motion several programs and funds, with estimated provision of eight billion euros between 2014 and 2020. In addition to these investments, the EU along with the UN and the World Bank has pledged additional 1.3 billion euros of support for the Priority Investment Plan – a regional investment initiative of the G5 Sahel countries aimed at developing over 40 infrastructure projects.

But how effective are all these measures? At least for now, there does not seem to be any significant progress in stabilizing the region. Violence and attacks in Mali, Burkina Faso, Niger, and Chad are progressively increasing. Burkina Faso is close to complete collapse, with the state suffering more jihadist attacks than any other country in the region. Radical Islamism in not the only threat to civilians. Local criminal groups, gangs or ethnic-based self-defense militias are also responsible for many atrocities. Just recently, at least 43 civilian people lost their lives as a result of inter-communal violence in Burkina Faso. Even government security forces contribute to the instability and chaos by disproportionate responses to factors considered as threats.

The lack of success so far may be due to the use of inadequate and incomplete strategy. The 3D approach might not be sufficient in the context of the social-political dynamics of the Sahel and the neighbouring countries. It practically aims to pacify the whole region by destroying violent armed militias that pose a threat to stability and security; brokering peace deals between local political elites; forging political and constitutional reforms; and increasing the defense capacity of local security forces to assume more responsibility. But this is a strategy that sees local militaries and political elites as part of the solution, when in most cases they are actually among the root causes of the problems. And this strategy is not “new”; these elites have been receiving European support for decades in many cases. Blaise Compaore the former longtime president of Burkina Faso is a good example of such cooperation. So is the current leader of Chad, Idriss Deby, who has been ruling the country for 30 years, often relying on French military support to tackle political rivals and rebels.

There is no easy solution to these overlapping crises; too much irreparable damage has already been done to millions of people. In such extreme environments, the choice to go towards radicalization, violence, and revenge is very easy. To prevent this, the present approach needs to be reshaped. Supporting the current political models has been historically proven to be inefficient, and could cost much more to Europe in the long-term than the current activity of several jihadist groups. The longer this instability persists, the more anti-Western sentiments will entrench in local communities that are already sensitive about their colonial past.

It is probable that the solution for the Sahel lies in local communities. The aggregation of their interests, needs, and perspectives should be the basis for all future economic and political reforms. The war against Islamic radicalism and organized crime cannot be won without gaining the trust of local communities. Europe should demonstrate that it has no will to colonize these areas again and respects the local peoples; a violation of such promises could push more people into radicalism. But if these promises are fulfilled and assistance offered from Europe to local peoples in accordance with their wishes, as expressed from the bottom-up, this could pave the path to a solution.