You are here: Home / Africa / Islamic terror threats across Africa ‘not degraded’ 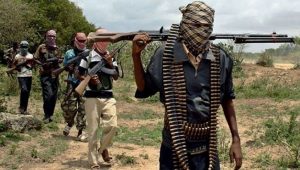 U.S. efforts to stem the threat from terror groups across Africa are struggling as military commanders grapple with the prospect of troop reductions and shifting priorities, according to a new government report on counterterrorism operations, like reported by voanews.com.

U.S. Africa Command has about 5,100 troops stationed on the continent, most of them in Djibouti. About 650 to 800 troops are operating in Somalia, with an additional 760 deployed to parts of West Africa.

But Pentagon officials appear to be concerned that without a continued presence, their ability to push back against groups affiliated with al-Qaida and Islamic State could suffer.

“The DoD [Department of Defense] said that it needs to remain postured to proactively identify these threats, determine their scope and scale, and respond appropriately,” Pentagon acting Inspector General Sean O’Donnell wrote in the report by the Defense Department inspector general, released Wednesday.

Pentagon officials have been contemplating cutting back on the number of troops stationed in Africa for most of the past year, with talk about an inevitable drawdown starting last December.

In February, former Defense Secretary Mike Esper announced plans to replace conventional combat troops with specialized military trainers, a move he said would leave “roughly the same number of troops on the continent.”

Since then, though, the number of U.S forces in Africa has declined by almost 1,000. And in some key regions, the U.S. and its partners have struggled to contain the threat.

“The terrorist threat in East Africa is not degraded,” the inspector general report warned.

The biggest concern in East Africa is al-Shabab, al-Qaida’s affiliate in Somalia, which controls as many as 10,000 fighters while harboring growing ambitions to go along with improved capabilities.

“Al-Shabab retains freedom of movement in many parts of southern Somalia and has demonstrated an ability and intent to attack outside of the country, including targeting U.S. interests,” the report said, noting the terror group’s threats to kidnap or kill Americans in neighboring Kenya.

U.S. State Department officials said there is also evidence that al-Shabab has been operating with relative impunity across parts of Somalia.

Help from Somalia’s own forces has also failed to meet expectations.

Somalia’s government “has not met milestones for the development of its security forces,” according to the IG report, which pointed to the Somalia Transition Plan that envisioned Somali military forces taking the lead in counterterrorism operations.

“Al-Shabab is not degraded to the point where Somali security forces can contain its threat independently,” the report added, saying that most units “continue to rely on international support for operations.”

Even the country’s most advanced, best trained forces, the Danab Brigades, are struggling, due to heavy combat losses and attrition, the report found.

And analysts fear that growing regional conflict, like that in Ethiopia, may indicate more trouble is on the way.

“The northern Ethiopia crisis has already led to some Ethiopian troops withdrawing from Somalia,” Emily Estelle, a research manager with the American Enterprise Institute’s Critical Threats Project, told VOA. “Al-Shabab has advanced under similar circumstances in the past and will likely do so again.”

The IG report also warned of a deteriorating situation in West Africa, citing an assessment by the Defense Intelligence Agency that the threat from extremist groups has increased exponentially over the past 10 years.

Of those groups, military officials said IS-West Africa remains the largest threat, with up to 5,000 fighters, followed by JNIM and Boko Haram, both of which are estimated to have about 2,000 fighters each.

The report said had it not been for the efforts of 5,000 French counterterrorism troops deployed to the region, the situation might be even worse in the Sahel and in Mali, in particular.

According to military officials, the one area where U.S. counterterrorism efforts appear to be meeting with some success is in North Africa.

Intelligence from the region suggests al-Qaida in the Islamic Maghreb (AQIM) has been reduced to fewer than 500 fighters across part of Libya, Tunisia and Algeria.

IS-Libya, meanwhile, is down to fewer than 100 fighters, as its network of foreign fighters appears to be drying up.

There are concerns about the growing number of foreign fighters who have made their way to Libya to fight in the ongoing battle between the Government of National Accord (GNA) and the Libyan National Army (LNA).

U.S. Africa Command estimates there were at least 10,000 foreign fighters taking part in the conflict as of the end of September.

That figure includes about 2,000 Russian mercenaries, who according to U.S. intelligence officials appear to be funded, at least in part, by the United Arab Emirates; 5,000 fighters sent by Turkey; and a recent influx of about 3,000 from Sudan to help support the LNA.

But while the larger conflict and its dependence on foreign fighters appears to be hurting the fortunes of IS and AQIM, AEI’s Estelle cautions the impact may be short-lived.

“The proxy warfare is prolonging the conflict and deepening the divide between Libyan factions,” she said. “This dynamic will likely allow [IS] or a similar group to reconstitute eventually, particularly if Libya fragments further.”