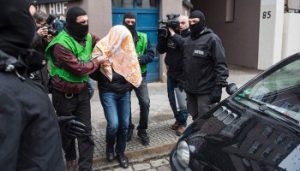 Authorities in the German state of Lower Saxony announce Thursday the arrest of a 26 year-old Salafist for allegedly planning a terrorist attack. State prosecutors said that bomb-making materials were found in his apartment in the town of Northeim in the state of Lower Saxony.

Police believe that the was planning to target police officers or soldiers. They believe he wanted to lure them into “a trap,” where he would lay the explosives.

“We receive between two and four credible tips on planned terrorist activity in Germany each day,” BfV chief Hans-Georg Maassen said. “We have to recognize that we are living in a different situation now than was normal.”