You are here: Home / MidEastGulf / Islamic Syrian rebels fight each other in besieged Damascus enclave 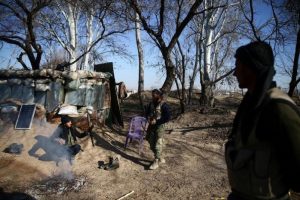 Fighting between rebel groups in the biggest insurgent stronghold near the Syrian capital Damascus entered a second day on Saturday, while government forces pressed an offensive against the besieged enclave, a war monitor said, like eported by reuters.com .

The clashes broke out in part of the densely-populated rural area east of Damascus known as the Eastern Ghouta which has been besieged by Syrian government forces since 2013.

The Syrian Observatory for Human Rights said it had documented the deaths of at least 38 fighters in the first 24 hours of fighting between rebel groups. It also reported civilian casualties.

Jaish al-Islam is pitted against the Failaq al-Rahman group and fighters from an alliance with links to al-Qaeda, rebels, activists and the Observatory said.

Fighting between the groups killed hundreds of people last April before a ceasefire was agreed in Qatar in May.

The rift was exploited by Syrian government forces to capture parts of the Eastern Ghouta, whose territory shrank by about a third in the second half of last year.

Jaish al-Islam is one of the biggest Syrian rebel groups and has been the dominant faction in the Eastern Ghouta. Its leader, Zahran Alloush, was killed in an air strike in December 2015.

A Failaq al-Rahman statement on Friday said Jaish al-Islam attacked some of its positions and said the factional fighting was not in the interests of the Eastern Ghouta or the Syrian revolution.

A statement by Jaish al-Islam said its dispute was with the group called Hayat Tahrir al-Sham (Liberation of the Levant Committee) which had been obstructing Jaish al-Islam members from going about their business.

aish al-Islam said it shared the same goals as Failaq al-Rahman and called on them to contain the crisis.

During the fighting, Syrian government and allied forces attacked the rebel-held district of Qaboun northwest of Eastern Ghouta by land and air.

The Syrian government, which is backed by Russian air power and Iranian-backed militias, launched an offensive against Qaboun and neighbouring Barza, which are believed to contain supply tunnels for the besieged enclave, in February.