You are here: Home / Senza categoria / Islamic State’s war on women and girls 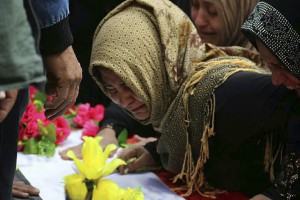 It is amazing to us that Western Muslims, in Europe and even the United States, have sought to join the Islamic State, despite its brutal barbarism, particularly to those who do not embrace their radical politics and theology.

How can any civilized individuals be attracted by a group that espouses not just mass murder, and the destruction of historical records, but slavery and rape?

The supposedly religious zealots have seized upon an ancient interpretation of the Koran to justify cruel and widespread sexual abuse of the women and young girls they captured and enslave.

Last August, the New York Times described in detail how IS rebels rely upon these ancient Islamic documents to justify their cruelty to their female prisoners.

“In the moments before he raped the 12-year-old girl, the Islamic State fighter took the time to explain that what he was about to do was not a sin,” the Times reported about one particular incident.

“Because the preteen girl practiced a religion other than Islam, the Koran not only gave him the right to rape her — it condoned and encouraged it, he insisted.”

The fighter first bound the girl’s hands and gagged her, the report continued. Then he knelt beside the bed and prostrated himself in prayer before getting on top of her.

“When it was over, he knelt to pray again, bookending the rape with acts of religious devotion.”

The Times recently reported that IS leaders have made sexual slavery “integral to the group’s operations” as they prey on women and girls they seized from the Yazidi religious sect almost two years ago.

Furthermore, the newer report added, the rebel fighters have taken to forcing birth control on their victims so they can continue their sexual abuse as the women are passed among them.

“Interviews with 21 women and girls who recently escaped the Islamic State, as well as an examination of the group’s official communications, illuminate how the practice has been enshrined in the group’s core tenets,” the Times wrote.

“The trade in Yazidi women and girls has created a persistent infrastructure, with a network of warehouses where the victims are held, viewing rooms where they are inspected and marketed, and a dedicated fleet of buses used to transport them,” it added.

It is surely inconceivable that outside the rebel community Muslim men would ever condone such dreadful behavior.

But at a time when a great many Westerners — including at least one candidate for president of the United States — appear inclined to believe all Islamists are the enemy, it would be helpful if more of the religion’s top leaders, speaking loudly and clearly, would denounce the IS interpretation of the Quran.

American theologists — who by no means condone the rebel behavior — nevertheless recognize that in the distant past specific passages in the Bible were used by some to justify the slave trade here in the United States, so this is not a case of our country having as pure a history as we’d like it to have.

But we long ago moved past tolerating such behavior.

Among other religious documents, the Islamic State cites traditions based on the sayings and deeds of the Prophet Muhammad to justify their behavior.

According to The Times, however, Islamic theology scholars “disagree … on the proper interpretation of these verses, and on the divisive question of whether Islam actually sanctions slavery.”

Many of these scholars believe that slavery in Islamic scripture is much the same as it is in the Bible, “which is to say as a reflection of the period in antiquity in which the religion was born,” the newspaper’s account noted.

“In the milieu in which the Koran arose, there was a widespread practice of men having sexual relationships with unfree women,” Kecia Ali, an associate professor of religion at Boston University and the author of a book on slavery in early Islam, told the newspaper.

“It wasn’t a particular religious institution,” he explained. “It was just how people did things.”

But this is the 21st century. That’s not how people do things today.