You are here: Home / Mediterranean / Islamic State’s staging a comeback in Libya as divisions linger 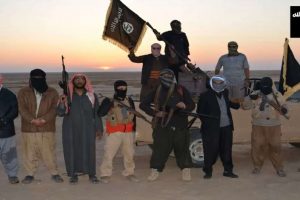 Less than a year after being driven out of its Libyan stronghold, Islamic State is re-emerging in the North African oil producer, like reported by bloomberg.com .

The group is “dangerously active” on the western fringes of the main oil producing region, in an area of about 40,000 square kilometers, according to Ibrahim Mlitan, who’s in charge of security in nearby Sirte. Militants have been seen roaming the coastal highway in armored vehicles, setting up checkpoints and searching for rival fighters. Their vows to reestablish Islamic State rule have caused panic among locals, he said.

Backed by U.S. airstrikes, forces loyal to the United Nations-backed Prime Minister Fayez al Serraj took Sirte from the extremists in December after months of fierce battles. Their victory was heralded by European leaders alarmed at the prospect of a lasting Islamic State presence on the Mediterranean. But the group is now exploiting a standoff between Serraj’s government and a rival administration based in the country’s east to stage a comeback, just as it is facing defeat in its heartlands in Syria and Iraq.

“The defeat of ISIS won’t happen without real consensus between politicians, which we are far from achieving,” Jalal al-Shweidi, a member of the eastern-based House of Representatives, said by phone, using another acronym for the group. “In the meantime, all sides are using these terrorist groups to justify their existence.”

Serraj arrived in Tripoli two years ago vowing to unite the nation and to end years of turmoil that had spiraled since the Arab Spring ouster of Muammar Qaddafi. While there have been declarations of progress, the deadlock between his government and eastern military leader Khalifa Haftar continues to hinder peace efforts. Oil production has picked up, yet excessive spending on things like salaries is eroding state coffers. Power cuts and a cash crunch make life difficult for civilians, while kidnappings and other crime are rife.

It was these ills that first allowed Islamic State to raise its black banners over Sirte, Qaddafi’s hometown, in 2014 and which are now facilitating its return. In August, the group beheaded 11 soldiers loyal to the east, while two others were killed in a suicide attack a week later. It taunts local officials in propaganda spread over social media.

By the start of the UN General Assembly on Tuesday, the world body’s envoy for Libya, Ghassan Salame, has been tasked with putting together a roadmap containing plans for a constitutional referendum. Moving ahead without a buy-in from the Libyan population risks leaving unresolved the issue of political legitimacy, Mattia Toaldo, senior policy fellow at the European Council on Foreign Relations, wrote in a report last month.

While Serraj retains considerable international support, some powerful players including Russia, the United Arab Emirates and Egypt have fallen in behind Haftar, complicating efforts to bridge Libya’s divisions. Mediation efforts by the U.K., France and Italy have struggled to make progress.

In the meantime, Islamic State is advancing. The region in which it now has a presence extends from the central town of al-Nawfalya to the eastern outskirts of Sirte, and south to beyond Waddan in Jufra district. There, rocky terrain provides it with a safe passage to and from the southern desert, said Mlitan, the Sirte security chief.