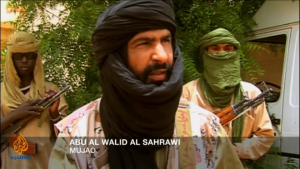 Al Akhbar, which has previously published statements from Sahrawi and other Saharan-based jihadists, reports that Sahrawi sent a message claiming that an attack on Sept. 2 in Burkina Faso, near the borders with Niger, was the work of his men. The assault, which occurred on a Burkinabe gendarmerie post in Markoye, left a border agent and a civilian dead.

If confirmed, this would mark the first operation claimed by the Islamic State in the Greater Sahara (ISGS). However, the group has issued threats to North African states in the past. In May, Sahrawi sent an audio statement to Al Jazeera in which he threatened “attacks on the United Nations mission in Western Sahara, Western tourists in Morocco, the headquarters of Moroccan security, and on foreign companies,” according to the report. (See LWJ report, Report: Head of the Islamic State’s Sahara branch threatens Morocco.)

After the group’s first emirs were killed in counterterrorism raids, Sahrawi became Al Murabitoon’s head. Last May, Sahrawi released an audio statement in which pledged his allegiance to the Islamic State and Abu Bakr al Baghdadi. He claimed to do so on behalf of the entire Al Murabitoon group. (See LWJ report, Confusion surrounds West African jihadists’ loyalty to Islamic State.)

After this occurred, clashes between Sahrawi’s men and fighters loyal to Mokhtar Belmokhtar was widely reported in local media. Additionally, Belmokhtar was elected leader of Murabitoon by its shura council last August and remerged with AQIM in early December. Since the clashes between the two opposing sides of Murabitoon, Sahrawi has been largely quiet since the aforementioned threats to Morocco.

Now, Sahrawi has claimed his ISGS has perpetrated its first military operation since being founded. While this does not bode well for the region’s stability, ISGS has experienced difficulty operating in the area. According to US officials contacted by The Long War Journal, Belmokhtar’s men intended to assassinate Sahrawi in the clashes in order to quell the jihadist dissidents. Al Qaeda’s domination of the jihadist landscape in Mali and neighboring states will also likely prove difficult for the Islamic State to gain any real foothold in the area.

While Sahrawi is loyal to al Baghdadi and the Islamic State, neither of the two audio statements sent to Al Akhbar and Al Jazeera have been released by official Islamic State media outlets. The Islamic State has not acknowledged any fighters, let alone a branch, in the Sahel either. This could mean that the Islamic State sees the fledgling group as too weak at this point or that the region is not a viable option for expansion at this point in time. Communication between ISGS and the mother organization in Iraq and Syria could also be an issue.