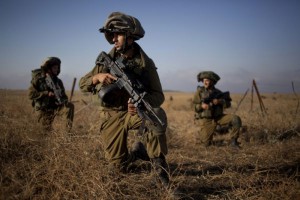 The Islamic State group has recently reminded Israel that it is in the jihadi group’s crosshairs. Islamic State leader Abu Bakr al-Baghdadi made a speech in which he directly threatened Israel — something he had refrained from doing previously — and promised that “Palestine” will soon be drenched with Jewish blood. The fact that so many Jews live in Israel is an advantage, he said, as that makes it easier for the Muslims to kill them.

Baghdadi and his people are up to their necks in a battle for Islamic State’s survival in Syria and Iraq. The Iraqi military dealt Islamic State a major blow last week, liberating Ramadi, one of the most important cities in Iraq, overrun by Islamic State in 2015. The group has also lost its foothold in several major locations in Syria.

Despite the blows Islamic State has suffered, Washington’s rhetoric suggesting that its end is near is grossly premature. The group is far from being on its knees.

Nevertheless, this is not a time of victory and conquests for Islamic State, but one of struggle, the result of a radical path that dismisses any compromise in favor of conflict. It is a path that only breeds new enemies and bolsters global efforts to eradicate Islamic State.

Despite Baghdadi’s threats, Israel is not a top priority for Islamic State. If anything, its troubles are drawing it away from our borders.

The group’s focus on Israel seems to serve mainly propaganda purposes. Islamic State knows that the Palestinian issue can serve as the lowest common denominator, one that can earn it support across the Arab and Muslim worlds. The group has to account for the fact that it seems to be fighting “infidels” worldwide and yet somehow it is leaving the Jewish state alone, for now.

Still, even if Baghdadi’s threats are propaganda, they cannot be dismissed. Only last week, defense officials voiced concern that the Yarmouk Martyrs Brigade, Islamic State loyalists on the Syrian side of the Golan Heights, would try to carry out a major terrorist attack on the northern border.

While the military believes the threat looming on the northern and southern borders from Islamic State loyalists is unlikely to see them stage border incursions, attacks against Israeli targets could still exact a heavy price, and require security forces be ready to counter the threat.

Israel is also concerned that Islamic State’s radical ideology will find a sympathetic ear among the Bedouins in the Negev. This is not an attempt to set up infrastructure or organize terrorist cells, but rather to inspire “lone wolves.” This is a serious issue that requires first and foremost that Israel thwart Islamic State’s propaganda efforts.

While the threat posed by Islamic State cannot be discounted, the bigger threats to Israel remain Iran and Hezbollah, as they post a more significant challenge.

Islamic State’s malignant expansion may, however, prove very dangerous in the long run, and it requires shaping the proper countermoves. The answer lies beyond adapting military deployment along the borders, and it includes cyber and online efforts, including on social media, as part of the fight to win the minds of young Arabs in Israel and abroad.