You are here: Home / MidEastGulf / Islamic State’s propaganda is running a 5-star hotel in Iraq 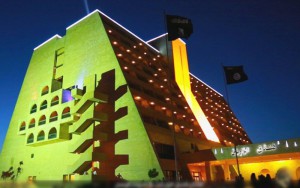 You won’t be able to reserve a room ahead of time with any of the major online sites if you want to stay at Mosul’s Ninawa International Hotel. Orbitz announces it doesn’t support bookings anywhere in Iraq, and Booking.com without explanation reverts immediately to the original search page when you enter “Mosul, Iraq.” But old Trip Advisor reviews say it is well worth the stay—or certainly was before the jihadists stormed into town last year.

No doubt if you motor there from Baghdad or Erbil, braving front-lines, dodging airstrikes, navigating Shia militias and talking your way through checkpoints manned by crazed abduction-minded jihadists, you should find a warm welcome with open—or possibly cocked—arms at this five-star palace in Iraq’s bustling second largest city.

In the absurdist determination to establish a modern caliphate, to fashion an earthly jannah (paradise) for those making the hajj to the Islamic State, the local jihadist ministry of propaganda has announced it has re-opened the Ninawa International.

Back in June 2013 the 265-room hotel with swimming pool and bowling alley was described by a visitor on Trip Advisor as an “amazing 5-stars hotel with affordable room rate” where you can enjoy the luxury life.

Probably its clientele are almost as international now as they were then. You could be rubbing shoulders with red-bearded Chechen Omar al-Shishani, or the British Mohammed Emwazi, otherwise known as Jihadi John (current occupation: executioner). But before setting off, read the US State Department warning to Americans that, “Travel within Iraq remains dangerous.” It would be a lot more dangerous if you made it to Mosul…and don’t ask for a martini, shaken or stirred.

The local Ministry of Propaganda has posted a series of pictures showing jihadists refurbishing the hotel, including one of workmen hammering away at intricate carvings on the front deemed idolatrous. One picture of the hotel lit up for re-opening night shows the Islamic State’s black flags unfurling in the breeze; others show workmen planting the flower-beds, trimming hedgerows, cleaning floors and windows and making the place spick and span. Colored balloons are outside for inaugural night and there are photographs of bearded male guests milling around the reception with not a woman in view, covered up or otherwise.

Reports suggest the hotel will be reserved only for commanders, but jihadi brides apparently will be welcome for weddings. Drinks will be soft, only, there’ll be no smoking, a strict dress code will be enforced, and punishments for infractions, if you are woman, will range from the application by female enforcers of a medieval-style spiked device to your breast, whippings, beatings, and death by a wide variety of means.

And don’t be checking in as Mr. and Mrs. Smith when the Ninawa opens to the general public. Adultery will get the missus stoned to death. If you are gay couple check into separate rooms. Otherwise you risk being hurled off the hotel roof or, yet again, stoned. (You might get an expiating hug before you are killed, but that’s not much consolation.)

Of course, sadly, you can’t make this stuff up: ISIS in its alternative universe is utterly unselfconscious about the surrealism of its propaganda (and the evil of its behavior) aimed at legitimizing a state of barbarity, one not validated by any mainstream Muslim scholar and looked at in horror by the vast, overwhelming majority of Muslims.

So we get all these faux attributes of statehood and stability—from the claimed minting of currency (try exchanging that at Thomas Cook), to the claimed opening of schools in Raqqa that still have not re-opened and where parents don’t want to send their children, to the announcement of a medical school, and now to the refurbishment of the so-called state’s very own five-star hotel (just in time for an assault on the city by anti-ISIS forces).

Right from the start, propagandists sought to present the caliphate as a valid, functioning state. “We have had all the requirements of the Islamic state like fundraising, alms-giving, penalties, and prayers,” said Abu Mohammed al Adnani, the ISIS spokesman, back last summer. That was an early claim by the extremists that they knew how to govern, tax and raise revenue, provide social benefits, maintain law and order and offer a state ideology and a reason for being.

But their state-building narrative is a nonsense, of course, and their propaganda videos, photographs and statements narrating stability and legitimacy merely highlight the disconnect. It is a cult space underpinned by a twisted reading of the Quran and kept going by brutality and guns.

For Abu Bakr al-Baghdadi, the man who would be emir, state legitimacy is crucial: it distinguishes ISIS from rival al Qaeda, which never managed to carve out a chunk of real estate to call its own—in Afghanistan it was a guest of the Taliban. ISIS plans not to be reduced to guest status.

The counterpoint to legitimacy is provided by the cultists themselves with their online videos and photographs of killings—of the beheading of journalists and aid workers—and by their boasting about enslaving Yazidi women and their explanations about how it is okay to have sex with pre-pubescent girls. Regimes built just on viciousness don’t last, eventually they fall. The Reich didn’t last a thousand years—and it apparently had some very good hotels.

Their fancy-sounding government departments don’t exist in reality. The Orwellian Department of Fatwa and Research that put out, for example, a list of do’s and don’t when it comes to having sex with slaves, consists of 10 judges, Raqqa activists tell me, none of whom have any real Islamic legal training. It is not a bustling hive of qualified functionaries. “They just do what they are told by the Shura Council,” says Abu Mohammed, one of the activists.

The reality of Raqqa, the “state’s” capital, is three or four hours of water and electricity a day; inflationary prices for food; the constant hitting up of locals for fines for this or that new infraction; and growing deprivation and disorganization, says Abu Mohammed. Although most U.S.-funded aid has stopped, the caliphate in Syria is dependent for public health operations on assistance supplied by the U.S. and European countries to international organizations, according to a State Department official, who asked not to be named for this article. And government workers still on the job get paid salaries, off-and-on, not from the coffers of the caliphate but from Damascus.

The rationale is that the people under ISIS control are innocent victims, and need some basic support. It’s hard enough to live day to day under the savage rule of an imaginary state. For almost a year now everyone in Mosul has learned that, like the guests in the song “Hotel California,” they can check out any time they like, but they can never leave.