You are here: Home / MidEastGulf / Islamic State’s problem: many foreign fighters are refusing to fight 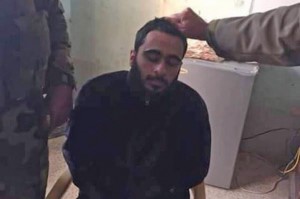 The documents in the Islamic State file hinted at signs of rebellion within the ranks of its foreign fighters, like reported by washingtonpost.com.

A Belgian militant had a medical note saying he had back pain and would not join the battle. A fighter from France claimed he wanted to leave Iraq to carry out a suicide attack at home. Several requested transfers to Syria. Others just simply refused to fight.

The documents on 14 “problem” fighters from the Tariq Bin Ziyad battalion — made up largely of foreigners — were found by Iraqi forces after they took over an Islamic State base in a neighborhood of Mosul last month.

At its peak, the Islamic State drew thousands of recruits each month and controlled about a third of Iraq’s territory, and the foreigners who poured in from dozens of countries have been characterized as the most die-hard fighters. But the group has steadily lost ground and appeal.

The militants are now besieged in the western half of Mosul, once the biggest city the Islamic State controlled and the heart of its self-proclaimed caliphate. But the group’s losses have triggered concerns in Europe that disillusioned fighters might find their way home.

“He doesn’t want to fight, wants to return to France,” said the notes on a 24-year-old listed as a French resident of Algerian descent. “Claims his will is a martyrdom operation in France. Claims sick but doesn’t have a medical report.”

He was one of five fighters in the file listed as having French residency, or as originally from France.

More citizens from France have joined the Islamic State than from any other country in Europe since 2011, when Syria’s popular uprising against President Bashar al-Assad turned violent and fueled the rise of extremist groups.

The French government reported a sharp decrease in the number of its citizens traveling to Syria and Iraq to join the group in the first half of 2016 but said that nearly 700 still remain there, including 275 women and 17 minors.

The forms in the file are marked with the year 2015 but appear to have been filled out later as they specify the dates that some of the militants joined, which stretch into 2016.

In addition to each militant’s name, country of origin, country of residency, date of birth, blood type and weapons specialties, the documents list the number of wives, children and “slave girls” each had. A photo is also included. It was not possibly to verify the personal information, but Iraqi officers who found the file said they believe it is genuine.

Two men from Kosovo refused to fight and asked to move to Syria. One said he had head pain.

Of the more than 4,000 foreign fighters who have left European Union nations for Iraq and Syria, around a third have returned, according to a report from The Hague-based International Centre for Counter-Terrorism. About 14 percent have been confirmed dead, while the rest remain overseas or their whereabouts are unknown.

“People say that they are the most motivated, but there are plenty of foreign fighters that went and found that the IS experience wasn’t what they thought it would be; they thought it would be a great adventure,” said Aymenn al-Timimi, an analyst specializing in militant groups who has compiled an online database of Islamic State documents, some of which indicate similar issues of morale.

The organization keeps meticulous records, leaving clues to its inner workings as the fighters are ejected from territory.

Iraqi counterterrorism forces discovered the documents in a house in Mosul’s al-Andalus neighborhood that was being used as an administrative base for the Tariq Bin Ziyad battalion.

The militants were seen removing documents and computers from the building, according to neighbors, before they set fire to the building as Iraqi forces retook the area, said Lt. Col. Muhanad al-Tamimi, whose unit found the documents unscathed in a desk drawer.

“Those foreign fighters are the most furious fighters we ever fought against,” he said. “When those fighters refuse to fight it means that they’ve realized this organization is fake Islam and not the one they came for.”

Iraqi troops faced a barrage of suicide car bombs and fierce resistance during the first month of their operations to retake Mosul last year. However, after pausing to reorganize, the forces have made rapid progress on the eastern side of the city this year.

Late last month, Prime Minister Haider al-Abadi said his forces had recaptured all neighborhoods of Mosul east of the Tigris River and that the Islamic State militants had “collapsed quickly.”

Edwin Bakker, a research fellow at the International Center for Counter-Terrorism and a professor of counterterrorism at Leiden University, said that fighters from Western European countries are largely known to intelligence agencies, but that there is less information on those from countries such as Bosnia and Kosovo.

With open borders in Europe, these fighters might return home and stage attacks on the continent, he said. But warnings of a “tsunami” of returning foreign fighters are exaggerated, he said.

“We shouldn’t underestimate the numbers that have gone to live there and die there,” he added.

Another 30-year-old French national in the file is noted as having been “involved in the departure of Abu Azzam al-Fransi and his wife from the land of the Caliphate.” “Fransi” indicates that the fighter he helped leave was also from France.

Lt. Gen. Abdul Ghani al-Assadi, commander of Iraq’s counterterrorism forces, said there are many foreign fighters in Mosul, and that foreign suicide bombers have been responsible for many of the 350 car bombs launched toward their lines.

In one Islamic State headquarters in the Dhubat neighborhood of Mosul, his forces found a stash of passports — 16 Russian and four French. There were also 20 blank Iraqi passports taken from Mosul’s passport department, he said, speculating that the militants are forging them to be able to leave the country.

Despite the recent rapid advances in eastern Mosul, Iraqi generals still expect a bloody fight ahead. The western side of the city, home to 750,000 civilians, is surrounded by Iraqi forces and the Islamic State members still there will have little choice but to fight or die.

“There are still a lot of people that are motivated,” Bakker said. “The majority is there to fight.”