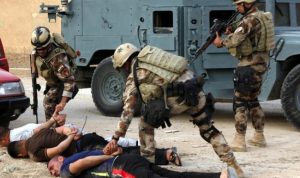 Iraqi security troops have arrested Islamic State’s police chief in an ambush, west of Anbar, like reported by iraqinews.com.

Speaking to Almaalomah website, the source said “security troops set up an ambush after information located the prominent leader Abu Fatma al-Muhajir, who was in charge of the Islamic police within the group in Hit town.”

The troops, according to the source, “set up the ambush for Muhajir, who was trying to escape toward Qaim town, on borders with Syria. He was then arrested.”

The militant “was hiding at desert regions and valleys,” he added. “He was transferred under tight measures to a security cell for investigation.”

On Sunday, the Security Media Cell announced arresting a member of Islamic State’s police in an operation as he was infiltrating via the Iraqi borders coming from Syria.

Islamic State continues to launch sporadic attacks across Iraq against troops. Security reports indicate that the militant group still poses threat against stability in the country.

Thousands of Islamic State militants as well as Iraqi civilians were killed since the government campaign, backed by paramilitary troops and the coalition was launched in October 2016 to fight the militant group, which declared a self-styled “caliphate” from Mosul in June 2014.