You are here: Home / Mediterranean / Islamic State’s ‘most potent’ crew is now in Sinai 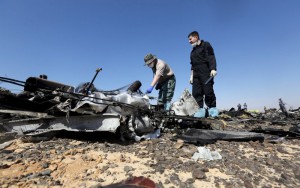 Soon after Russian planes began dropping bombs on Islamic militants in Syria a month ago, in an effort to prop up the country’s embattled dictator Bashar al-Assad, ISIS vowed that Russia, and by extension its citizens, would be a target. Last Saturday, Russian Metrojet Flight 9268 departed Sharm el-Sheikh, Egypt, and flew directly over the homebase of an ISIS affiliate with the ambition, and perhaps the capability, to make good on that threat.

The growing fears that an explosive device may have brought down the airplane, killing all 224 on board, stems in part from the rise of the ISIS affiliate in the northern part of the Sinai peninsula.

Over the past four years, the self-proclaimed Islamic State’s branch in Egypt’s Sinai peninsula has grown into a formidable threat. It “is one of the group’s most active and potent ISIL affiliates,” a U.S. counterterrorism official told The Daily Beast, using an alternative acronym for the group.

The branch, which calls itself the Islamic State of the Sinai, or Wilayat al Sinai, has twice claimed responsibility for taking down the Russian airliner, most recently on Wednesday. But it hasn’t offered any of ISIS’ trademark evidence, such as martyr statements or videos of the plane crashing. Rather, the group said essentially: “Trust us, we did it.”  And that only added to the mystery about how the plane came down.

U.S. officials said this week that some intelligence points to ISIS or its affiliate in Sinai as having detonated bomb on the Russian airliner, though the Obama administration has yet to publicly make that claim, and scant evidence has been put forward.

If Wilayat al Sinai turned its sights on foreign citizens, it would mark a significant evolution in ISIS’ regional strategy, from gobbling up territory to launching attacks on civilians beyond its holdouts in Iraq and Syria. It would also stand as one of the deadliest attack by a terror group since 9/11, and the first successful attack since then against civilian aviation.

“The group has waged a long-standing insurgency against Egyptian authorities,” the U.S. official said, emphasizing that he wasn’t commenting on the cause of the Russian Metrojet crash.

Wilayat al Sinai evolved from an indigenous terror group that joined forces with self-proclaimed caliphate and has expanded its campaign of attacks beyond Egyptian authorities towards international targets. The group may still have a focus that’s close to home.

“Terrorist groups are often focused on local grievances, which helps extremists present themselves as defenders of their communities and develop grassroots support,” the official said. “While ISIL Sinai uses the ISIL moniker, it wouldn’t be surprising if future attacks by the group feature a mix of targets to satisfy their focus on targeting the Egyptian government, while also heeding ISIL leadership calls to strike enemies of the so-called caliphate.”

It’s not clear if the group has developed the capability to smuggle a bomb aboard a plane. But it knows how to move weapons.

“The Sinai is well-known for illicit smuggling and ISIL Sinai has been able to acquire and use a range of weapons,” the official said. “As an ISIL affiliate, the group could also draw on the resources and expertise of other ISIL affiliates and supporters in the region.”

To be sure, Egyptian authorities have yet to draw any conclusions about who was responsible for the jet downing, if indeed it was not the result of an accident or some catastrophic mechanical failure.

But British Prime Minister David Cameron, on the eve of a state visit by Egyptian President Abdel Fattah el Sissi, suspended all flights from the Sinai amid growing reports that a bomb may have brought down the flight.

On Thursday, Cameron, defending his decision, said it was “more likely than not a terrorist bomb” was responsible. The same day, Germany’s Lufthansa and Turkish airlines followed suit and suspended flights. France and Belgium urged all but essential travel to the Sinai.

Sissi declined to criticize the decision while he was in London but other members of his government did not hold back. “I greatly regret the British government’s decision to halt flights,” Hisham Zaazou, Egypt’s tourist minister, told The Daily Beast on Thursday, “It seems to have been hasty and I do not understand the logic behind it.”