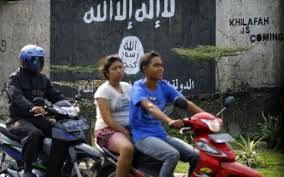 The influence of the Islamic State group extends well beyond the land it controls in Syria and Iraq, reaching recruits around the world, including the Asia-Pacific region. Below, 10 Associated Press writers based in the region discuss how the extremist movement is affecting their countries:

Islamic State has been particularly effective at recruiting followers in Australia. An estimated 120 Australians are believed to be fighting with the movement and other militant groups in Syria and Iraq, a relatively high number given Australia’s population of just 24 million. Many more have followed the group’s calls for inciting violence within Australia, including a group of teens arrested this year on suspicion of plotting an Islamic State group-inspired attack at a Veterans’ Day ceremony.

In a bid to stem the flow of foreign fighters, Australia made it a criminal offense for its citizens to travel to certain parts of Iraq and Syria that are held by Islamic State movement fighters. The government has also canceled the passports of people it believes are planning to join the fight in the Middle East.

Experts disagree about why the group has had so much recruiting success in Australia, which is widely regarded as a multicultural success story and where around 2 percent of the population is Muslim. Some experts cite the poor integration of some Australian Muslims with the rest of the country, and the particular focus that Islamic State recruiters have given to Australia. The Australian government has also failed to keep tabs on some citizens who were radicalized.

Islamic State claimed responsibility for the recent killings in Bangladesh of an Italian and a Japanese, both gunned down in daytime attacks five days apart. The government quickly dismissed the claims as unverified. Still, the poor South Asian country has seen a clear rise in violence blamed on radical Islamist groups, including the killing of four moderate bloggers earlier this year.

Most of Bangladesh’s 172 million citizens are Muslim. While the government is secular and traditionally moderate, the emergence of Islamist political groups has created a clear divide between moderates and radicals and contributed to political instability. Prime Minister Sheikh Hasina has been cracking down on radicalism, and six hardline Islamist groups have been banned in recent years. Analysts say the small few that remain are too disorganized to have links with global extremist groups.

“In Bangladesh, extremist groups’ activities are very limited and they are homegrown,” said retired army Maj. Gen. Abdur Rashid, now a security analyst. “To influence the local politics, they are active and they want to fool the people by drumming up that they are connected with the IS, but actually they are not.”

But another analyst, retired Brig. Gen. Shahedul Anam Khan, described the threat of extremism in Bangladesh as “complex and evolving.”

“The government response has been disturbing for there is a tendency to outright reject the international hypothesis that we have connections with IS,” Khan said.

India’s 172 million Muslims are seen as relatively deprived and discriminated against, and tensions with majority Hindus have been a seven-decade constant since the partition of India and Pakistan in 1947 sparked communal violence that left an estimated 1 million dead.

But while some groups like the pro-Pakistan Indian Mujaheddin have found a foothold, officials and analysts say India’s Muslims are traditionally moderate and unlikely Islamic State recruits.

Even in Kashmir, where a militant uprising launched in 1989 challenged Indian rule in the mostly Muslim Himalayan territory, “there is no sign of IS at all in Kashmir,” said police Inspector-General Syed Javaid Mujtaba Gillani. He noted that police had questioned a few youths who brandished IS flags during an anti-India protest last year, but “some of them didn’t even know what IS is about. We concluded that it’s a sort of teaser some protesters use to provoke us.”

Still, there is a fear that India’s Muslims might be radicalized, especially after al-Qaida launched its South Asia branch last year in the country. Muslim imams in the country have urged their followers to eschew the Islamic State and other radical groups, calling them “anti-Islamic.”

An estimated 600 Indonesians have joined IS, and more than 30 have returned to their homeland, national police chief Gen. Badrodin Haiti said. All have been questioned, 15 have been arrested and 12 of those face trial, accused of conspiring with and recruiting for militant groups including Islamic State.

Some of the money used to support IS activities in Indonesia has been traced to Australia by officials in both countries working together.

“We have detected supporting funds from an Australian source to terrorist networks in Indonesia,” said Agus Santoso, deputy chairman of the Financial Transactions and Analysis Center, an Indonesian money-laundering watchdog.

The center is prohibited from publicly disclosing detailed information of its intelligence and data gathering, but Santoso said detailed disclosures have been shared with Australian federal police for further investigation.

Predominantly Muslim Malaysia has detained 123 people suspected to be linked to the Islamic State group, including civil servants and members of security forces, in the past two years. Police have said some were plotting to launch attacks in strategic areas of Kuala Lumpur, the capital. Some 100 Malaysians were also believed to have gone to Syria to join IS.

The government has warned that the rise of IS influence can “inspire and reignite militant groups in Malaysia.”

“The call to jihad by IS is very influential as it is based on Islamic compulsion that has been manipulated so Malaysians are compelled to join them,” the government said in a policy paper last November.

A new law aimed at curbing the growth of IS allows detention without trial and without possibility of a court challenge. Critics have slammed the move as a revival of a controversial security law that was repealed in 2012, and warned it could severely curtail civil liberties. A second new law empowers authorities to suspend or revoke the travel documents of anyone believed to be engaging in or supporting terrorist acts.

The tiny Indian Ocean archipelago nation of the Maldives is known for its sandy beaches, crystal waters and luxury resorts, but is quickly earning a reputation as a recruitment mecca for radicals. The country of 350,000 is almost entirely Muslim, and some analysts say it has provided one of the world’s highest numbers per capita of Islamic State recruits. While the Maldives itself keeps no statistics on the issue, local media frequently report on citizens killed while fighting in Syria.

The Maldives prohibits practicing or preaching non-Muslim faiths. Critics accuse the government of tacitly supporting IS recruitment while stoking Islamist sentiments, a charge the government denies.

The government has started to worry about fallout from IS recruitment. Parliament is now debating legislation to check on citizens who travel abroad, though it has yet to clarify exactly what those laws might look like.

Militants from at least four small but violent Muslim insurgent groups in the Philippines pledged support last year to the Islamic State group and its leader, Abu Bakr al-Baghdadi, mostly in videotaped messages posted on the Internet. Philippine security officials say they have found no clear evidence so far of a direct link and active collaboration between Islamic State extremists and any of the groups: Abu Sayyaf, the Bangsamoro Islamic Freedom Movement, Rajah Solaiman Movement and the Ansar Khalifa.

Islamic State-inspired black flags, however, are visible in a video released this week, purportedly by Abu Sayyaf, of four Western and Filipino hostages kidnapped last month in the southern Philippines.

Former President Fidel Ramos said in a TV interview last year that at least 100 young Muslim Filipinos have traveled to Iraq to undergo training and later return home as “jihadists.” The Philippine military says it has not confirmed that.

Philippine officials have approved the creation of an interagency group that would create a database to better monitor Filipino militants who may travel to join the battle in Syria and Iraq and later return home, according to a confidential government report obtained by The Associated Press.