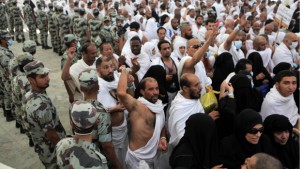 The Islamic State group is extending its reach in Saudi Arabia, expanding the scope of its attacks and drawing in new recruits with its radical ideology. Its determination to bring down the U.S.-allied royal family has raised concerns it could threaten the annual Muslim hajj pilgrimage later this month.

So far, the extremist group’s presence in the kingdom appears to be in a low-level stage, but it has claimed four significant bombings since May, one of them in neighbouring Kuwait. And it has rapidly ramped up its rhetoric, aiming to undermine the Al Saud royal family’s legitimacy, which is rooted in part in its claim to implement Islamic Shariah law and to be the protectors of Islam’s most sacred sites in Mecca and Medina that are at the centre of hajj.

“Daesh and its followers have made it very clear that Saudi Arabia is their ultimate target,” Saudi analyst Fahad Nazer said, referring to the Islamic State group by its Arabic acronym. “Because of Mecca and Medina … That’s their ultimate prize.”

An attack last month in which IS claimed responsibility appeared to mark a significant spread in the group’s reach. Militants claiming loyalty to the group had already carried out three major bombings – two in eastern Saudi Arabia in May and one in Kuwait City in June, all targeting Shiite mosques and killing 53 people.

But on Aug. 6, a suicide bomber attacked in western Saudi Arabia, hitting a mosque inside a police compound in Abha, 565 kilometres south of Mecca, killing 15 people in the deadliest attack on the kingdom’s security forces in years. Eleven of the dead belonged to an elite counterterrorism unit whose tasks include protecting the hajj pilgrimage.

The alleged affiliate that claimed responsibility for the August attack called itself the “Hijaz Province” of the Islamic State, its first claim of a branch in the Hijaz, the traditional name for the eastern stretch of the Arabian Peninsula where the holy cities are located. The previous attacks were claimed by the group’s “Najd Province,” the traditional name for the central heartland of the peninsula and the homeland of the Al Saud family.

Lori Boghardt, Gulf security analyst at the Washington Institute, said it would not be surprising if IS militants tried to take advantage of the hajj to stage an attack, particularly since the group has encouraged lone wolf operations. This year, the hajj begins Sept. 21 and is expected to draw some 3 million Muslims from around the world.

“The kingdom is a holy grail of sorts as a target from the perspective of ISIS because of its significance to Muslims,” she said, referring to the group by its longer acronym.

Potential backlash for any attack

A direct attack on pilgrims carrying out the hajj rites – potentially causing large casualties or damaging holy sites – may be a risky move for IS, bringing a backlash from shocked Muslims worldwide. Still, the group “has made it very clear they have no red lines,” said Nazer, a senior analyst at the Virginia-based consultancy and security firm JTG Inc.

But there are other potential targets, including security forces in or around Mecca. The group could attempt to hit pilgrims from Shiite-majority nations like Iran, who would stand out since pilgrims generally move in groups by country. IS and other Sunni radicals consider Shiites heretics.

Justin Mahshouf, a 30 year-old American Shiite planning to perform the hajj this year, said friends and family are telling him to be careful. “There seems to be a really bad vibe right now in the Shiite community.”

Little is known about the structure of the Islamic State group in Saudi Arabia. It is not known if the militants in the kingdom have direct operational ties with the group’s leadership based in its self-declared “caliphate” in Iraq and Syria – or if they simply operate independently in the group’s name.

In all four attacks claimed by the branches in the kingdom, the bombers were young Saudis, suggesting the group’s ranks are largely homegrown as opposed to foreign militants. The bomber in the August attack was identified as Yousef Suleiman, a 21-year-old Saudi with no record of ever having travelled abroad, pointing to the group’s ability to radicalize even youth who have not gone to join fighting in Syria.

“If you are looking at IS as a state, the territory it controls is not going to vastly expand, but the ideology it espouses is expanding,” said Hani Sabra, head of Middle East practice at Eurasia Group.

Since Syria’s civil war escalated over the past four years, Saudi Arabia’s ultraconservative clerics urged young men to go fight alongside Sunni rebels in Iraq and Syria. Concerned about possible radicalization, the late King Abdullah last year banned fighting abroad or encouraging it. But by then, some 2,500 Saudis had already gone to Syria. The Interior Ministry says around 650 have since returned and that they left disillusioned with the fighting.

This year, Saudi Arabia and other Gulf countries joined the U.S.-led campaign of airstrikes against IS in Syria.

In an Aug. 24 audiotape, an IS supporter denounced the royal family as “tyrants” ruling Islam’s heartland without implementing what IS calls its true teachings.

“Pledge allegiance to the Islamic State,” the audio urged Saudis. “Stand up against the tyrants and liberate the peninsula of Muhammad … from their filth.”

A prominent radical Saudi cleric, Nasr al-Fahd, who has been imprisoned since 2003 for connections to militancy, recently declared support for IS in a message smuggled from his prison. In the letter carried by IS supporters online, he advised others to pledge allegiance to the Islamic State group, which he said had “destroyed the idols” and is implementing Shariah, not “man-made laws.”

Saudi Arabia is already run by one of the most ultraconservative interpretations of Shariah, known as Wahhabism. Some of its clerics view Shiites as heretics, are virulently opposed to monuments or tombs they see as encouraging idolatry, believe in a strict segregation of the sexes and support the use of religious police to enforce Shariah rules – all teachings not far from the Islamic State group’s ideology.

But Wahhabi clerics make a crucial distinction, preaching that the recognized ruler – in this case, the Al Sauds – must be obeyed. They condemn protests or violence that could lead to instability. The kingdom’s highest religious authority, Grand Mufti Sheikh Abdulaziz Al Sheikh, denounced IS and al-Qaida as Islam’s number one enemy.

When asked by The Associated Press by email about possible threats of attacks on the hajj, Interior Ministry spokesman Maj. Gen. Mansour al-Turki replied that “that security forces will act swiftly and decisively with any violations of laws and instructions related to hajj.”

He said the holy sites are protected by a force specifically dedicated to the task and a large number of additional security forces will be deployed during hajj to ensure pilgrims’ “security and safety” and manage the traffic of the large crowds. He also pointed to the elaborate security system of surveillance cameras and helicopters that the kingdom implements each year. He could not give exact figures or specify whether the deployment would be larger this year.

The kingdom has also arrested hundreds of suspected militants this year. Overseeing that effort is Crown Prince Mohammed bin Nayef, who is also interior minister and led the battle that eventually crushed al-Qaida’s branch in the kingdom in 2006.

Sabra of Eurasia Group said despite a strengthening presence, IS does not currently represent a direct threat to Saudi political stability. He pointed to the crown prince’s experience in counterterrorism. “Mohammed bin Nayef has proven that this is a job that he takes very seriously.”