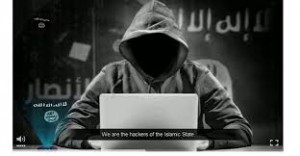 The CyberCaliphate, a hacking collective linked to the Islamic State terror group, circulated a message over social media Tuesday vowing to take revenge for the death of one of its members.

Through the hacking group’s official account on Telegram, a messaging platform popular among Islamic State supporters, the CyberCaliphate posted an image of Islamic State soldiers equipped with rocket launchers, captioned with the words “Gazwa,” “Revenge” and “Abu Hussein.”

“Gazwa” roughly translates to “a raid,” and “Abu Hussein” was an alias used by Junaid Hussain, a British computer hacker who was considered a key member of the CyberCaliphate and instrumental in Islamic State’s online recruitment efforts before being killed in an U.S. airstrike last year.

Fair to middling and not without spelling errors, the Telegram message nevertheless landed on the radar of the Middle East Media Research Institute, a D.C.-based nonprofit that monitors and translates media reports from the Arab world.

Steven Stalinsky, the executive director of the institute, told The Hill that the CyberCaliphate has similarly vowed revenge in the past, but has not been attributed with any successful or significant hacking operations in months, especially since Hussain’s death.

With lawmakers urging Internet companies to keep terrorists off their services, however, any inclination that Islamic State supporters are having success with social media campaigns could be a catalyst for passing further anti-terror legislation.

The House and Senate are currently reviewing proposals that would force Internet companies to more closely monitor their own networks for extremist content, and Sen. Cory Booker, New Jersey Democrat, said last week that he’s preparing a bill intended to increase the U.S. government’s efforts at countering the terror group’s narratives.

The CyberCaliphate has previously been credited with compromising the Twitter accounts of the U.S. Central Command, Newsweek and the International Business Times, and a Kosovo man was arrested in October pursuant to an indictment that accused him of providing the hacking group with a stolen list of federal employees that was used for an hit list circulated by the Islamic State.