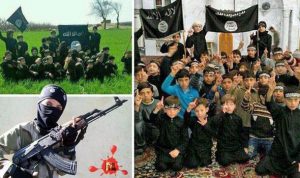 Thousands of children are in jails across Iraq, suspected of being fully trained up as fighters by Islamic State. Some are just six years old, like reported by newshub.co.nz.

The children have been brought up not just as bystanders caught in a brutal war, but also recruited and indoctrinated by IS.

Adiba Qasam told CBS News she watched IS’s propaganda to help the young ones. She returned to Iraq to help identify and help IS’s child victims recover from their torture.

“Maybe this one is brainwashed. Look at his eyes, he doesn’t know what he’s doing,” she said while watching one video.

One woman whose children were indoctrinated told CBS News she saw the boys practicing beheading by chopping the heads off dolls.

She said they suffered mental and psychological torture from IS fighters and she feared they were so attached to their captors, they’d report her if she tried to escape.

It starts young. They learn to tell the time with clocks on timebombs.

From the age of five, school books are teaching them IS’s brutal rule. Bombs and firearms sit alongside apples and bananas while learning addition and subtraction, and English books ask them to complete sentences reading: “I can shoot [blank].”

The battle is still raging across Iraq and Syria to tear away IS’s hold. But for some of their victims, the violence they’ve been raised with is all they know as a normal life.