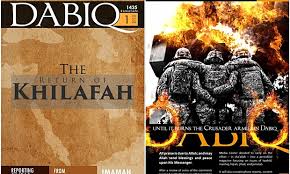 Islamic State is soaked in an apocalyptic vision in which its self-styled caliphate is merely staging point for the ultimate destination, a battle between Muslims and the army of infidels.

Foreshadowed in the sayings of the Prophet Mohammed and appropriated by Islamic State propagandists, the prophecy predicts the final conflict will take place in the northern Syrian towns of Dabiq​ or Al-Amaq.

Total victory for the forces of Islam will be accompanied by the return of the messiah – Jesus Christ, the “12th imam” Mahdi, or both, depending on the version – and the end of the suffering of Muslims.

So enamoured are the cadres of the barbaric terrorist group with the armageddon augury, they beheaded Western journalists and aid workers in Dabiq​. In videos of the decapitations, IS fighters dared the armed forces of the West to meet them there and face inevitable destruction.

IS named its English language propaganda magazine after the town. It frequently quotes the deceased founder of al Qaeda in Iraq, the precursor of IS, Abu Musab al-Zarqawi, forecasting that the “spark” lit by the group in Iraq will “intensify until it burns the crusader armies in Dabiq.”

As France declares “a merciless war” on Islamic State and world leaders ponder more aggressive military action, it leaves open the question: was the slaughter of civilians in Paris designed to enrage and provoke the West into a full-scale invasion?

The answer is no. At least, not yet.

To be sure, after the painful experience of US-led forces in Afghanistan and Iraq, the idea that the West can again be goaded into a long, bloody ground war has appeal for the militant group.

But the evidence suggests something different is afoot.

Rather than encourage an invasion, the attack on Paris, the claimed downing of a Russian passenger jet and suicide bombings in Beirut and Ankara are designed instead to dissuade France, the US and its allies from their bombing campaign in Iraq and Syria.

In its statement claiming responsibility for the Paris atrocity, IS warns the “smell of death will never leave their noses as long as they lead the convoy of the Crusader campaign, [while they are] striking the Muslims in land of the caliphate with their planes.”

In other words, this is retribution. There is a terrible price to pay for attempting to destroy the caliphate. The IS attacks, many have noted, coincide with the caliphate suffering a series of small but significant military reversals in recent weeks.

“[IS] wants to control territory. It wants to end up as a porcupine,” says Deakin University terrorism expert Greg Barton. “A prey you cannot eat because you get a mouthful of spikes if you try.”

Barton says the apparent contradiction between the objective of a cataclysmic end-of-days battle and a terrorist campaign designed to deter attacks by the West has its own peculiar logic.

“IS is part apocalyptic cult but it’s also run by former senior Iraqi military officers,” he says. “To have these rational military planners and religious crazies​ side by side creates a certain symbiosis that works for them.”

The fervent embrace of an impending apocalypse is much more about recruitment than military strategy.

It convinces young Muslims that they are taking part in a divinely sanctioned campaign of profound import, and that dying for the cause is worthwhile – indeed, blessed.

An endless supply of “martyrs” underpins its military tactics and remains critical to the survival of its besieged caliphate.