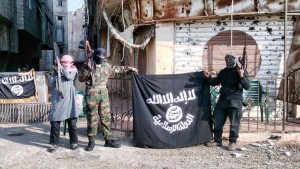 The United Nations has called for an immediate halt in the bloody attack by Islamic State (IS) militants on a Palestinian refugee camp in Damascus, according to ABC.

Details are yet to emerge on the civilian toll but UN and Palestinian officials confirmed IS militants entered Yarmouk camp, sparking fierce clashes.

Nidal Betare grew up in Yarmouk, spending 32 years there before moving to Washington to work for an international aid organisation.

He spoke to friends and relatives in the camp who told him there were hundreds of IS militants fighting for control.

“The people inside the Yarmouk camp were shocked when they saw flags of ISIS inside Yarmouk,” Mr Betare said.

“My friends are telling me that even the women inside the camp, that they are holding knives and they are in the street to face ISIS if they enter their homes.

“And there is another armed group, its name [is] Ansar Bati al-Maqdis, inside the camp and they are fighting ISIS now.”

Mr Betare was told that refugees in the camp may hold out for up to three days before running out of supplies and weapons.

The UN Relief and Works Agency said there are a variety of groups engaged in serious fighting near the 18,000 refugees in the camp, including 3,500 children.

Christopher Gunness, spokesman for the UNRWA for Palestinian Refugees in the east, said the civilians are “at extreme risk of death, of serious injury, of trauma and of displacement”.

“So we’re anxiously continuing to monitor the situation but … in the strongest possible terms, UNRWA demands from all parties respectful and compliance with their obligations to ensure the protection of civilians,” Mr Gunness said.

“We further demand an end to the fighting and to return to conditions that would enable our staff to support and assist these civilians in Yarmouk.

“It’s a matter of life and death, it’s extremely urgent and that’s what has to happen.”

Mr Gunness described the situation in the camp before the attack as “beyond dire”.

“Since July 2013 there has been an almost total siege, there’s been almost no water, no electricity,” he said.