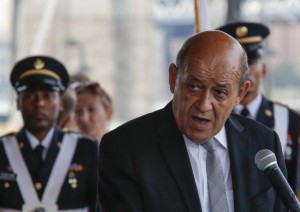 Echoing comments previously made by Nigel Farage and the head of the EU’s judicial cooperation agency Eurojust, the French Minister of Defence, Jean-Yves Le Drain, today warned that in the absence of a political solution an Islamic State (IS) controlled Libya – “a thieves’ den and a terrorists’ den” – would be the perfect embarcation point for terrorists to infiltrate migrant ferry boats to Europe.

Visiting Washington, D.C., for meetings with Secretary of Defense Ashton Carter, Le Drian made the comments at a meeting hosted by The German Marshall Fund of the United States.

Le Drian explained to the audience that Libya is no longer a functioning state and that he was warning some time ago of the arrival of IS before it had actually taken root there. He said it has been an arms and drugs bazar for a while, but now it is also a terrorist base. Although IS is there, France and its allies, backed by America’s financial and logistic support, have been able to stop the progression of terrorist groups and put them “on their back foot” for now.

That accepted, he said that what he calls the “terrorists’ den” is much larger than the south of Libya today. Le Drian explained: “[IS] which started to be present on the eastern side of Libya, not very far from Tobruk, in and around Derna, where they have a training camp. Well now they took Sirte, they took the airport and they occupy 200 kilometres of Libyan coast and they keep going ahead and spreading.”

He acknowledged there is an internationally recognised government in Tobruk with an army and a parliament which can claim legitimacy, but the larger cities of Tripoli and Misrata do not recognise it as a real government and fight among each other. In the absence of a political solution to that question the only military one he can see is an IS victory.

“…and then terrorism is going to be strengthened in Europe because there’ll be two new elements for [IS]. First they’ll have more and more financial assets, because of all the taxes that are going to proceed for the crossing of the Meditterranean, and then terrorist infiltration among the migrants. So we are facing, now, a serious situation and the political situation does not exist today and if we do nothing this is exactly what is going to happen.”

Further explaining why Libya is his “main obsession” Le Drian said there are “relatively few foreign fighters that are present in Libya, they are very present in Syria and Iraq, and not only French citizens, by the way. We think that there is around 10, 12, 15 thousand coming from Europe but also from Tunisia, from Morocco, from Saudi Arabia, from Chechnya, Kazakhstan, even from Australia now. So the day some will come from Syria to Libya they will be 200 miles from the French coast, from the European coast.”

Le Drian also spoke at length about France’s commitment to the minimum two per cent of GDP defence budget target set for NATO members. He noted that France is spending about 1.86 per cent but the figure is increasing, in part due to the deployment of French troops in national defence following the Charlie Hebdo massacre by Islamist terrorists in January. France now has 18,600 more soldiers than planned for 2015 since increasing its budget.

Le Drian also discussed joint military efforts between France and the US, saying they had strengthened since 2013 to become “a solid pillar on which we can lean”. He noted that the two countries share the same evaluation and assessment of threats, adding that although priorities may differ “actually we have no difference in terms of strategic interests”.

Having discussed intelligence sharing between France and the US, Le Drian was asked at one point if that had been put at risk by the revelation that the NSA had been spying on three French Presidents. He replied: