You are here: Home / West Asia / Islamic State: Why Afghanistan isn’t panicking – yet 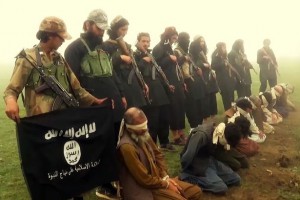 A driver-by-trade with hands worn from hard work, Sayed Jan is not a man who scares easily. He has seen years of Taliban control of his remote Kunar Province, and watched as American troops once dug in to fight back.

But the recent arrival of black-masked Islamic State (IS) militants and their brutal ways in eastern Afghanistan has prompted fear, and convinced him to flee his village.

“When [IS] burned the school, two people tried to stop it and they shot them,” says Mr. Sayed, whose gray beard is turning white. He had just arrived safely in Kabul, and says he plans to bring out his nine children one at a time, to avoid IS detection.

Of all the multitude of problems in Afghanistan – from a resurgent Taliban and political gridlock, to an exodus of despair by the nation’s best and brightest – IS’s emergence and control of remote areas in the east is not a top priority.

The extreme views of IS, and the foreign flavor of its cadre, mean the group is not likely to displace the puritanical Taliban as the Islamist militants of choice in Afghanistan. But IS jihadists are already fighting the Taliban and have absorbed some of its rival’s most radical members, including a top commander, Mullah Mansour Dadullah, who was reportedly killed last month in an internecine firefight in southeastern Zabul Province.

IS fighters are known to have infuriated ordinary Afghans by killing and abusing them; and they have also taken ownership of the Taliban’s anti-government, foreigners-must-go message. But IS has also made gains on the ground and may grow stronger, Afghans say, simply by paying high salaries of up to $500 per month.

That makes IS a challenge to the government and some Taliban factions, say United Nations monitors. Afghan officials — sometimes prone to exaggerate about IS — contributed to a UN report in June that IS has been sighted in 25 of 34 Afghan provinces. The UN report also said that recruiting is the primary goal of IS, and the organization’s “branding” is going “viral.” Afghan security forces, however, describe IS as a “potential” new threat rather than an “immediate” threat.

“The only reason people join [IS] is because they pay more money,” says Abdul, a former small shop owner whose family fled Nangahar province, near the Pakistan border. The Taliban “don’t pay fighters, so they get weaker day-by-day.”

The IS focus, by contrast, “is on teenagers and young people,” says Mr. Abdul, speaking in Kabul. “They are very emotional, it’s very easy to convince them [to join IS].” Abdul says he watched as IS arrived and burned Taliban homes in his village. He was forced to dig graves for relatives and friends who were executed because of their ties to the government.

“We are really afraid,” he says. “Our children are always crying when they see IS. They have very dangerous faces.”

Reports of IS first emerged in Afghanistan in mid-2014, as Pakistani militants came across the border to avoid a Pakistani government crackdown. In January this year, they announced the creation of the “Khorasan” franchise of IS, an ancient term that includes Afghanistan and Pakistan.

It is unclear what direct ties this Khorasan branch may have with the self-declared IS “caliphate” in Iraq and Syria. But some of the more brutal tactics are being copied. A propaganda video of the execution of 10 alleged collaborators has turned up showing victims forced to kneel en masse on explosives.

When IS militants came to Sayed’s village months ago, they shot their guns and gathered all men at the mosque. They introduced themselves as IS and ordered the men to sever all ties with the government. That first visit, they arrested six people for their official connections to Kabul, but elders got them released.

The next time, they arrested almost a dozen more; then another 18 on a third round. Sayed says he was among the latter, and was held overnight because his beard was not long enough. In a neighboring village, some of those arrested were killed.

Business with you, you and you

“They would point people out, and say: ‘You, you, and you – we have some business with you,’” recalls Sayed. Two of his teenage sons were “invited” to join Daesh, he says, using the Arabic acronym for the group.

In his area, children were not allowed to go to school and women were forced to stay at home. These rules are enforced by beatings in the street. Sayed estimates that of the 350 families in his village, some 60 of them have fled to safety in large cities like Jalalabad or Kabul.

“The new Islamists are bad to the family, knock on the door at night demanding food or a safe place to sleep,” he says. His Naray district once housed a US forward base, but today has little central government presence. “People don’t have the ability to fight them…. I don’t know about other areas, but in Naray is it not in Daesh policy to be friends with us.”

The brutal treatment is in contrast to the welcome IS portrayed for itself when visited by an Afghan television crew earlier this year. IS commanders showed how local children were given over to their cause willingly; they were taught the tenets of jihad, how shoot a pistol, and how to throw a grenade.

But that is not how the IS has treated residents of Kunar.

“They tell us, ‘You are not Muslim because you are with this government. You are with the Americans, so don’t pretend you are Muslim’,” says Sayed. “If the security situation stays as it is now, it’s possible for Daesh to go all over the province.”

“It’s a big change, because in the Taliban regime it was not like this. There were schools and women could go out. The villagers cooperated,” he adds. “But these people are really different. We don’t know their rules, or who they are.”