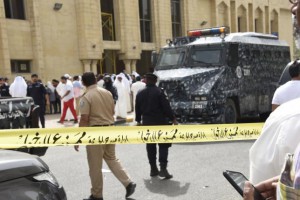 When a Saudi Arabian man flew to Kuwait in the early hours of Friday to carry out the country’s worst militant attack, a bomb vest, Kuwaiti-style Arab robes, a place to prepare, and a car and driver to take him to his target were all lined up for him.

The vest had been ferried across from Saudi Arabia a few days before in a complex operation suggesting Islamic State now commands a capable network of militants, propagandists and sympathisers on the Arabian peninsula, a security source said.

Among those Fahd Suliman Abdul-Muhsen al-Qabaa contacted when his overnight flight via Bahrain landed, one had a family tie to Islamic State and another links to al Qaeda attacks in Kuwait a decade earlier, a security source and Kuwaiti media have reported.

Hours later, CCTV cameras recorded the young man entering Imam al-Sadeq mosque, his figure made portly by the bomb-laden vest concealed beneath his robe. He paused briefly to examine the 2,000 Shi’ite Muslim men prostrated in prayer, then detonated the device.

The timing of his entry, when few in the mosque were in a position to ask intrusive questions of a stranger, was another sign of the attention to detail of the cross-border team, which also appears to have coordinated propaganda around the attack.

The killing of 27 people was Kuwait’s deadliest militant attack, and the most lethal in any of the six hereditary-ruled Gulf Arab states since bombings in Riyadh killed 35 at the start of an al Qaeda campaign in Saudi Arabia in May 2003.

The assault has raised concerns about the number of young Saudi men willing to travel to attack Shi’ites in smaller Gulf Arab states and so make good on a threat by Islamic State to step up violence in the holy fasting month of Ramadan.

Officials worry this could be a model for future bombings in the energy-rich Gulf states: A bomber drawn from Saudi Arabia’s large pool of radicalised Islamists who flies or drives into a neighbouring state — Gulf Arabs enjoy visa free travel between their countries — and works with a local cell.

Aimen Dean, a Saudi former al Qaeda insider who now runs a Gulf-based security consultancy, said Islamic State’s cells posed “a more flexible threat” that would be harder to track down than those deployed by al Qaeda in its 2003-06 campaign.

This was in part due to the spread of encrypted messaging systems, enabling dispersed groups of militants to be directed from abroad, whereas al Qaeda in Saudi Arabia in 2003-06 was centrally managed and therefore easier to infiltrate, he said.

Friday’s bombing was one of three attacks on civilians on three continents that day that drew worldwide condemnation – the others were in Tunisia and France — and happened almost a year to the day after Islamic State declared a caliphate.

Of the three, the Kuwait attack appears the one mostly clearly directed by the militant network, to judge by Islamic State’s rapidity in asserting its role, and possibly by the connections of the individuals allegedly involved.

A source familiar with U.S. investigations into the attack said Qabaa was seen as a serious member of IS’ Saudi affiliate.

Kuwaiti officials are studying CCTV footage of the Nuwaiseeb border post, where the vest was brought in from the kingdom.

Responsibility was claimed within hours by the group’s “Wilayat of Najd” branch, and a posthumous audio of Qabaa followed shortly after. The Wilayat of Najd had also claimed two bombings of Shi’ite Mosques in Saudi Arabia.

Najd, the central and northern part of Saudi Arabia, is the heartland of the kingdom’s ultra-conservative religious traditions and was also the birthplace of Qabaa.

An article about Qabaa, from Qassim region in Najd, published by the Saudi-owned daily al Hayat, paints a picture of a college dropout and loner who took up militant causes.

Qabaa attended demonstrations demanding the release of suspected militants detained by state security — rare public protests in the authoritarian kingdom, it said in a report that could not immediately be authenticated independently.

Another participant at such gatherings was Saleh al-Qashami, a 20-year-old man responsible for a suicide bombing that killed 21 in Qatif last month. Both men have relatives in Saudi prisons accused of terrorism and incitement, al-Hayat said.

Qabaa made failed attempts to travel to join militant groups in Iraq and Syria, according to one of his relatives who spoke to al Hayat. He did not have many friends and used to spend a lot of hours in front of his computer, the newspaper reported.

Kuwaiti al-Qabas newspaper reported on Tuesday that five people suspected of involvement in the attack had been referred to the public prosecutor. The five, it said, had confessed to receiving funding from abroad for attacks on places of worship.

A senior lawyer, Mohammed al-Humaidi, said he understood a defence lawyer had not yet been retained by those sent for public prosecution. Such a step would take some more days.

Newspapers did not identify the five but said they included people accused of close involvement in the plot.

Authorities said these included the driver of the Japanese-made car. State media named him as Abdul-Rahman Sabah Aidan.

Aidan was subsequently found by police at a house whose owner, Mohammed Shukhair al-Enizi, had served a prison term for playing a role in an al-Qaeda linked group, the Lions of the Peninsula, active in the mid-2000s, Kuwaiti newspapers said.

Members of that group sought to attack U.S. military bases in Kuwait and took part in shootings in Kuwait City in 2005 that killed nine Islamists and four security force members.

Authorities have named the owner of the car used in the bombing as Jarrah Nimer Mijbil Ghazi. A security source said Ghazi had a brother in Islamic State in Syria and investigators were looking for any link that person might have to the bombing.