You are here: Home / Mediterranean / Islamic State weapons seized in Libya by the Misrata fighters 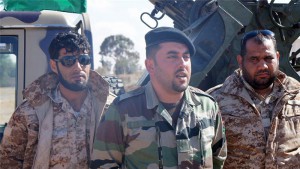 A cache of weapons reportedly belonging to Isis – according to Independent – have been seized by military forces in Sirte, Libya.

The Brigade 166 of Misrata also claims to have set off explosives belonging to the group on Tuesday following battles with Isis fighters.

One of the commanders of Brigade 166, who are acting under the command of the Tripoli military, said their fighters clashed with the militants east of the coastal city of Sirte. Most of the Islamic fighters were killed during the latest battle.

The forces raided areas that Isis militants gathered at, including schools that the group used for training and bomb-making facilities, the Brigade 166 commander added.

During the skirmish the Misrata fighters also found three foreigners who say they were oil workers. The men say they were kidnapped and later released by Isis.

Since the fall of Libyan leader Muammar Gaddafi, Sirte is believed to have become a stronghold for Isis forces in Libya.

Sirte is one of the country’s biggest oil ports and it is feared that if Isis are not quelled, they could spread to the capital Tripoli.