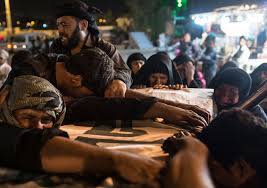 “Chalang” magazine has published a study carried out by “terrorism analysis center”, which emphasizes that Islamic state organization in Syria and Iraq has a huge fortune estimated at 2200 billion dollars, or about 1937 billion euros.

The European Centre, which was established in 2014 said that ISIS has added 200 billion to its fortune in a matter of one year, the oil is no longer the only financial source, where the compulsory taxes now generate an important income.

The study prepared by “John Charles Preezar” and “Damien Martinez” attributed this super-rich status goes back to ISIS control more and more on Syria, especially after it seized last September the new oil fields, as it is now controlling 80% of Syria’s production and 10% of Iraq’s production.

The report added that the revenues of oil fell by half because of the bombing of the International coalition’s bombing , which hinders black the transfer of oil process, so tax has become its first source, rising from 360 million to one billion dollars in ” Nineveh province” (where there is Mosul) 50 % of the wages of employees who are 60 thousand , this generates between 500 and 600 million dollars per year”.

According to the same source, between (5 and 10) percent of Turkey’s imports of cotton comes from fields that are exploited by ISIS west of Syria, as the organization gets some money as well from the gas trade, wheat and drugs, in addition to donations which it is receiving from its supporters.

Finally, the United Nations confirmed in a report issued last August that ISIS trade in human beings in an orderly and specific with worldwide: children less than 10 years at 150 euros, adolescents 110 euros, women between 20 and 30 years to 70 euros, meaning that value is determined by age that facilitates the exploitation process and brainwashing