You are here: Home / Europe / Islamic State wants to targets Kurds in Europe 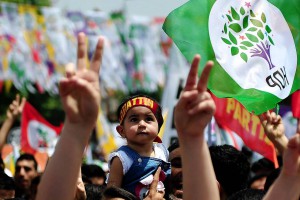 The Islamic state wants to target Kurds in the West, the latest IS magazine published last Wednesday reveals.

The IS called on Muslims living in the West who are not able to move to Islamic state hold territory, to attack enemies of the IS specifically naming the Kurdish forces that fight IS in Syria and Iraq.

“As for the Muslim who is unable to perform hijrah from dārul-kufr to the Khilāfah, then there is much opportunity for him to strike out against the kāfir enemies of the Islamic State,” the IS said in Dabiq 11.

“What prevents him [the Muslim in the West] from targeting the allies of the PKK [Kurdistan Workers Party] and Peshmerga in Europe and America,” the IS said in a call to Muslims in Europe.

The IS specifically mentioned two groups affiliated to the PKK in Germany and the Netherlands.

“(…) including the “Confederation of Kurdish Associations in Europe” (KON-KURD – based in Brussels) and the “International Kurdish Businessmen Union” (KAR-SAZ – based in Rotterdam), both of which are infamous for their financial support of the PKK?” the IS said in the article.