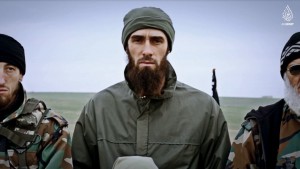 ISIS released a new propaganda video on Thursday threatening Europe’s Balkan countries and calling on Muslims living in the Balkans to join the fight in Syria and Iraq. The video, called “Honor is in Jihad, a message to the Balkans,” was released by Al-Hayat media center, the official propaganda wing dedicated to reaching western audiences. It features Balkan fighters who emigrated to fight with ISIS, and contains English-language narration about the history and persecution of Muslim communities living in Bosnia, Kosovo, Macedonia, Albania and other countries in the region.

In the video, several fighters apparently from Balkan states call on Muslims living back home to travel to Iraq and Syria, where they can live “in dignity and safety with their families.” One of the fighters, called Abu-Muhammad al-Bosni (the Bosnian), says: “Many of you complain that you are not able to have a beard or to wear niqab. It is your chance now, make hijra (migration).” He told viewers to cast their minds back to “the last war in Bosnia where the government prepared a genocide and raped our Muslim sisters. You didn’t raise your voice against that, and now you have a chance to fix that mistake.”

As in other propaganda videos, the fighters tell those who cannot migrate, to instead launch attacks against the “dictators of Kosovo, Macedonia, Albania,” and their armies on their home turf. “Put explosives under their cars and in their houses,” the fighters say. “Take poison and put [it] in their meals or in their drinks.”