The latest diseased video from the Islamic State includes bomb-making tips and throat-cutting techniques for aspiring “lone wolf” jihadis, with a live demonstration of knife decapitation upon a helpless prisoner 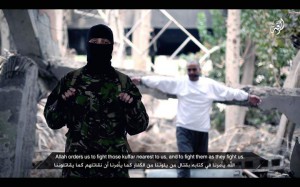 Heavy.com reports the video, titled “You Must Fight Them, O Muwahhid,” was released through Islamic State social media channels on November 26. The title is a term for believers in the hardline Salafist Sunni Islam practiced by ISIS. The video is directed at a French audience but includes English subtitles.

The video offers to demonstrate the best ways to “slaughter disbelievers,” with a heavy emphasis on knives, although a masked terrorist also delivers bomb-making tips in an ordinary-looking domestic kitchen.

“We must fight them,” says French-speaking terrorist trainer Abu Sulayman al-Firansi in the video, according to the UK Daily Mail’s translation.

al-Firansi urges French jihadis to carry out terrorist attacks in revenge for the bombing of ISIS targets in the Middle East: “Even with the most basic equipment, they have kept crusaders sleepless and worried by fighting for ISIS.”

The hideous highlight of the video is a live demonstration of knife decapitation techniques on a prisoner who has been tied to a cross. Advice for selecting a good knife is offered.

Another on-camera murder involves a spy who was allegedly working for the Kurdish PKK. He is forced to run while ISIS fighters shoot at his feet. They kill him by detonating the bomb in his backpack.

The video also celebrates terrorist attacks in Europe, Russia, and the United States, saying the attackers “frustrated and terrified the nations of kufr [unbelievers], cast dread into their souls, and filled their hearts with panic.”

“The kufr fight us and you for our religion. So kill them. France’s history is up to you,” al-Firansi urges his audience.

There is also copious praise for attacks against U.S. troops in Iraq: “The Americans did not leave Iraq except knocked down and paralyzed, or missing arms and legs, or psychologically damaged, and most of that was through operations by individual mujahidin, with the simplest of tools.”

The ISIS video has drawn renewed interest in the U.S. after Monday’s car and knife attack at Ohio State University — exactly the sort of attack urged by the Islamic State in its instructional film.