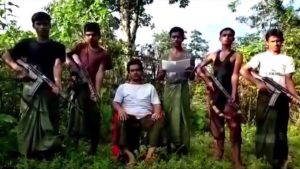 Some Malaysians backed by the Islamic State (IS) are engaging the Myanmar government in a “holy war”, purportedly to defend the oppressed Rohingya Muslims in Rakhine, like reported by channelnewsasia.com .

Malaysia’s counter-terror chief Ayob Khan said IS was using the Rohingya issue as a platform to recruit new members to engage in acts of terrorism.

He was speaking to reporters after the launch of the ISIS Threat to Youths Awareness Seminar in Malacca on Sunday (Sep 17).

“Myanmar is closer to Malaysia than Syria and the southern Philippines where the conflict is ongoing, and now Rakhine has become their latest destination for ‘jihad’,” Khan added.

The counter-terror head also revealed that a cendol seller from Malacca was arrested on Sep 10 on suspicion of promoting militancy through the printing and distribution of IS flags.

The 38-year-old was planning to join the Islamic State militants in the Philippines and Rakhine.

In a related development, Khan said the recruitment of new members was still ongoing despite the death of the head of IS in Southeast Asia, Muhamad Wanndy Mohamad Jedi.

Muhamad Wanndy, who hailed from Malacca, was killed in a drone attack in Raqqa, Syria at the end of April.

Khan added that there were four Malaysians still in Syria, where they are believed to be actively recruiting Malaysians.