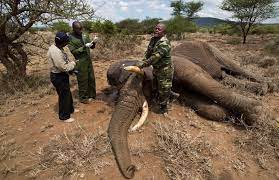 ISIS is “growing stronger” through its use of the illegal ivory and illicit sugar trades to fund terrorists in East Africa, according to a new report by a former British ambassador. Extremist fighters and terror campaigns are being paid for through the unlawful activities which are becoming “more sophisticated”, said Sir Ivor Roberts, a former British diplomat in Lebanon and head of counter-terrorism in the Foreign Office, like reported by thenationalnews.com.

He makes these claims in his report An Unholy Alliance: Links Between Extremism and Illicit Trade in East Africa, produced for non-government organisation the Counter Extremism Project.

He warns that East Africa is being “critically undermined” by the illegal trade, as terror groups continue to thrive.

Mr Roberts’ report was published as ministers from the Global Coalition against ISIS on Tuesday warned of the “urgent threat” posed by growing insurgency in parts of Africa.

Last year, attacks by ISIS in Africa grew by a third.

“The most effective way for the East African region, and the wider international community, to fight extremism, crime, and corruption is to turn off the taps of illicit trade,” Mr Roberts said.

“This can ensure critical revenues are not lost to the shadow economy but are instead invested in key services.

“Combating illicit trade should be the number one priority for East African governments and their international allies. This issue goes beyond the borders of East Africa, and it is imperative that the international community pay heed.”

His report warns that extremist groups such as Al Shabab and Ahlus Sunnah wal Jamaah are exploiting and causing “huge damage” to precarious populations of elephant, rhino and pangolin.

“Illegal wildlife trafficking has continued during the pandemic, despite increasing international awareness of the threat posed by zoonotic diseases which may originate in the illicit transfer of animal products,” he said.

“Ongoing conflicts in central African nations, such as the Democratic Republic of Congo and Central African Republic, are fuelled by the illegal expropriation and smuggling of environmental resources, including diamonds and wildlife.

“These illicit goods are commonly routed through East Africa on their way to international markets.

“Illicit trade is the lifeblood which sustains extremist groups operating in East Africa and its surrounding regions, including Al Shabab, ISIS and the Janjaweed to the north, the Lord’s Resistance Army and dozens more rebel militias in Central Africa, and the ISIS-linked Ahlus Sunnah wal Jamaah in northern Mozambique.

“There is a great need for co-ordinated action against illicit trade across the whole East African region. It is not enough for individual countries to take isolated measures targeting only specific categories of illicit trade.”

“It is evident that crime, corruption, extremism and illicit trade are inextricably linked in East Africa,” he said.

“Therefore, to combat the extremist, criminal and corrupt dangers facing the region it is imperative that national governments and appropriate regional bodies adopt an approach which treats illicit trade as an equivalent security threat. Illicit trade, extremism, crime and corruption must be seen as a composite whole.”

On Tuesday, British Foreign Secretary Dominic Raab and US Secretary of State Antony Blinken said a “comprehensive and collective effort remains necessary to achieve a full and enduring defeat of ISIS worldwide”.

“Two years on from the territorial defeat of Daesh and liberation of nearly eight million people from its cruel grip, we remain committed to preventing its resurgence,” Mr Raab said.

“The UK is supporting partner forces confronting Daesh in Iraq and Syria, stabilising liberated communities, building institutions so that terrorists face justice and leading efforts against its twisted propaganda.”

Last week ISIS-linked extremists carried out a five-day assault on people living next to a $20 billion site for a major gas energy project, led by the French company Total, in Mozambique.

It led to thousands of people being rescued by a flotilla of fishing vessels, after taking refuge on nearby beaches.