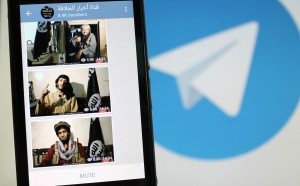 The Islamic State’s terrorist army in recent weeks has used channels on a popular messaging app to show gruesome killings and to instruct followers on how to attack the U.S. with chemical weapons, despite the app’s assertion that it blocks such extremists, according to washingtontimes.com.

The terrorists’ presentations have appeared on at least two channels on Telegram, the messaging platform launched and subsidized by Russian dissident Pavel Durov from his adopted home, Berlin.

Telegram offers encrypted messaging, ensuring the privacy of users who increasingly include Islamic terrorists. They can plan without worrying about authorities intercepting their communications.

A libertarian, Mr. Durov created the free-of-charge Telegram in 2013 as a tool for political dissidents, including those in his home country of Russia. His overriding user theme: privacy.

He asserts in his web page’s guidelines and in a series of Twitter messages last month that Telegram takes down extremist messages and videos.