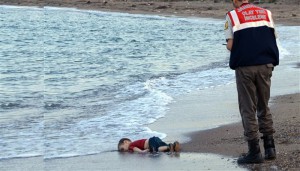 The jihadist Islamic State of Iraq and the Levant (ISIL) group has used the shocking image of drowned Syrian toddler Aylan Kurdi to warn refugees against trying to flee to the West, calling it a “major sin”.

Three-year-old Aylan’s body was photographed lying in the sand in Bodrum, Turkey after he drowned in a boat accident while his family tried to reach Greece — an image that helped to focus international attention on the plight of refugees.

In the latest issue of its English-language magazine Dabiq, ISIL published the boy’s image under the headline: “The danger of Abandoning Darul-Islam,” or the land of Islam, including the group’s self-declared “caliphate” in Syria and Iraq.

“Sadly some Syrians and Libyans are willing to risk the lives and souls of those whom they are responsible to raise… sacrificing many of them during the dangerous trip to the lands of the war-waging crusaders,” it said.

It said Muslims were committing a “dangerous major sin” by bringing children to the West, where “they are under the constant threat of fornication, sodomy, drugs and alcohol”.

The group claims to be instituting Islamic rule but has been denounced by mainstream Muslims as perverting religion.

Thousands of Syrians and Iraqis have fled areas under its control.