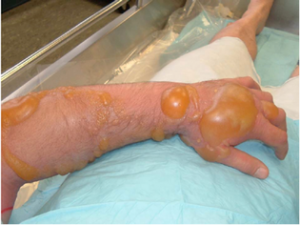 “We have credible information that the agent used in the attack was mustard,” a senior U.S. official told the Journal.

Islamic State could have obtained the mustard agent in Syria, whose government admitted to having large quantities of the blistering agent in 2013, when it agreed to give up its chemical weapons arsenal, the newspaper reported.

“That makes the most sense,” the Journal quoted a senior U.S. official as saying about the possibility that Islamic State obtained the mustard agent in Syria.

Islamic State could also have obtained the mustard agent in Iraq.

The newspaper did not specify where or when the attack occurred, or whether it caused casualties.

The White House’s National Security Council said it was aware of the reports and was seeking more information.

“We continue to take these and all allegations of chemical weapons use very seriously,” spokesman Ali Baskey said in a statement.

U.S. intelligence agencies have said in the past they believed Islamic State has used chlorine gas in attacks in Iraq, the Journal reported. Chlorine is not a banned chemical agent.