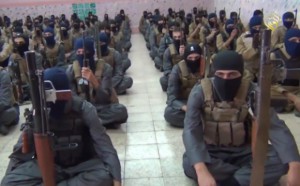 The Islamic State urged its followers on Tuesday to escalate attacks against Christians, Shi’ites and Sunni Muslims fighting with a U.S.-led coalition against the ultra-radical group.

Jihadists should turn the holy month of Ramadan, which began last week, into a time of “calamity for the infidels … Shi’ites and apostate Muslims”, Isalmic State spokesman Abu Muhammad al-Adnani said in an audio message. He urged more attacks in Iraq, Syria and Libya.

“Muslims everywhere, we congratulate you over the arrival of the holy month,” he said. “Be keen to conquer in this holy month and to become exposed to martyrdom.”

Adnani also called on Sunnis in Jordan, Lebanon and Saudi Arabia to rise against “tyrannical leaders” and warned them against advancing Shi’ites, pointing to the treatment of Sunnis under a Shi’ite-led government in Iraq and in Syria under the Alawites, the Shi’ite offshoot to which President Bashar al Assad belongs.

He said his group was undeterred by the U.S.-led coalition against Islamic State, which has seized large areas of Iraq and Syria and proclaimed a caliphate.

“We will continue, God willing, in our path and will not care even if many nations gang up against us or how many swords we are struck by,” he said.

Adnani also warned U.S. President Barack Obama that Islamic State would retaliate for the attacks against it.

“Obama and your defeated army, we promise you in the future setback after setback and surprise after surprise,” he said.

Sunni tribes in Iraq were joining the militants after the Iraqi government and the United States had failed to bring them into Iraq’s political process, Adnani said.

“The Sunni people are now behind the jihadists … the enemies have been petrified by the daily pledges of allegiance by the chiefs of tribes to the Mujahideen,” he said.

In response to the pleading of Iraqi tribal elders, Adnani said, Islamic State chief Abu Bakr al Baghdadi had given Sunnis working with the U.S.-led coalition and those who were still in the Iraqi army one last chance to repent.

In recent weeks, several major Iraqi tribes in the restive Anbar province announced their allegiance to the militants in recorded videos.

Adnani devoted the bulk of his 29-minute speech to an appeal to Iraqi Sunnis. He said their enemies were Western infidels and Shiites, who wanted to expel them from Iraq and turn it into a Shi’ite state. Iraqi Sunnis were being evicted en masse from areas taken over by Shi’ite militias supported by the Iraqi government, he said.

“Needless to say, you all know the kidnappings, evictions, killings of Sunnis that happen every day in Baghdad,” he said. “Thousands and thousands” were already jailed in prisons in the predominantly Shi’ite provinces of southern Iraq, he said.

Adnani also called on those insurgents fighting the militant group in north and northwestern Syria to stop battling them or face the consequences.