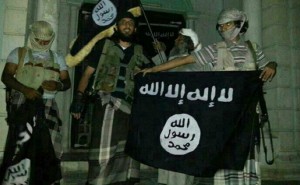 Terror outfit Islamic State (IS) is trying to gain a foothold in Pakistan occupied Kashmir, a senior Army official said on Friday.

“Whatever inputs we have, IS has not taken in a major way, but they are definitely trying to gain foothold in the area (PoK)”, General Officer Commanding (GoC), 16 Corps, Lt Gen KH Singh told reporters on sidelines of an army function in Jhangar on Friday.

He was replying to a question on the threat perception of IS in PoK amid media reports about the terror outfit’s presence in the valley.

Lt Gen Singh said that there were around 200 to 225 militants in 36 launch pads across the Pir Panchal range waiting to infiltrate into the Indian side.

The terror infrastructure across the border was intact and training camps were still active, he added.

Army today celebrated “Jhangar Day” to commemorate the sacrifice made by Brigadier Mohd Usman, who was martyred during the 1947-48 operation in Noushera sector of Rajouri district in Jammu and Kashmir.

Brigadier Mohd Usman had played a pivotal role as commander of 50 Parachute Brigade during the recapture of Jhangar and the battle of Noushera, which earned him the title of ‘Noushera Ka Sher’. He was posthumously awarded the “Maha Vir Chakra”.

The officer also laid wreath on the War Memorial and felicitated family members of martyred soldiers and interacted with the locals of Noushera Tehsil who were recently treated in Medical and Artificial Limb Camp.