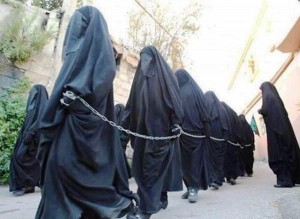 The Islamic State (IS) militants have transferred scores of women prisoners from Syria to the northern Iraqi city of Mosul.

Sa’ed Mamuzeni, spokesperson for the Kurdistan Democratic Party (KDP) in Mosul, told BasNews on Thursday that the militants have transferred 150 female members of the Syrian al-Nusra Front to the second largest city in Iraq, Mosul.

“Primarily IS want to use the women as spoils of war and force them into sexual slavery,” said Mamuzeni.

According to the Mosul KDP spokesperson, most of the women and girls that have been taken to Mosul are teenagers.

Since the capture of Mosul by IS in June 2014, the insurgents have kidnapped hundreds of girls and women from Sinjar and other areas in northern Iraq and Syria and used them as sex slaves.