At least 50 UK youngsters are growing up in the Isis ‘caliphate’, where education means watching videos of murders. 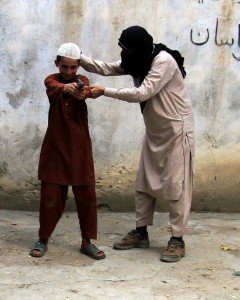 A new generation of Isis recruits is being developed in the Islamic State’s “caliphate”, indoctrinated with religious concepts from birth, and viewed by its fighters as better and purer than themselves, according to the first study of the exploitation and abuse of children as a means of securing the group’s future.

Researchers for Quilliam, a London counter-extremism thinktank have investigated they way Isis recruits children and indoctrinates and trains them for jihad. As many as 50 children from the UK are growing up in Islamic State-controlled territory, with an estimated 30,000 foreign recruits, including more than 800 Britons, believed to have gone to Syria to fight.

The report, Children of Islamic State, has been endorsed by the UN and will be published on Wednesday in parliament. It was compiled through a study of propaganda released by Isis featuring children and liasing with trusted sources within the caliphate. The portrait painted is of a terrorist group eager to enlist children to help safeguard its future. Many are being trained as spies, preachers, soldiers, “executioners” and suicide bombers.

The authors state: “The organisation … focuses a large number of its efforts in indoctrinating children through an extremism-based education curriculum, and fostering them to become future terrorists. The current generation of fighters sees these children as better and more lethal fighters than themselves, because rather than being converted into radical ideologies they have been indoctrinated into these extreme values from birth, or a very young age.”

Not having been corrupted by living according to secular values, they are considered purer than adult fighters. “These children are saved from corruption,” states the study, “making them stronger than the current mujahideen [fighters] because they have a superior understanding of Islam from youth and from school curriculum and are better and more brutal fighters as they are trained in violence from a very young age”.

The foreign recruits represent a potentially significant strengthening of the group’s cohort of around 80,000 militants, 50,000 in Syria and 30,000 in Iraq. An estimated six million men, women and children are estimated to be living within its self-styled Isis calpihate.

“The aim is to prepare a new, stronger, second generation of mujahideen, conditioned and taught to be a future resource for the group,” the report adds. “The area of most concern is that Islamic State is preparing its army by indoctrinating young children in its schools and normalising them to violence through witnessing public executions, watching Islamic State videos in media centres and giving children toy weapons to play with.”

The focus on youth bears similarities, according to the report, to the forced recruitment of child soldiers in Liberia in the 1990s, when Charles Taylor seized power in 1997 with a rebel army filled with children.

The authors conclude that Isis also appears to have studied the Nazi regime, which created the Hitler Youth to indoctrinate children. The UN has received credible but unverified reports about an Isis youth wing, Fityan al Islam, meaning boys of Islam.

The authors also point to the precedent of the Baathist regime in Iraq, which in the late 1970s established the Futuwah (Youth Vanguard) movement with the most important Iraqi child soldier units known as Ashbal Saddam, or Saddam’s Lion Cubs, made up of boys aged 10 to 15.

Researchers for Quilliam found that children were used extensively in Isis propaganda – between 1 August last year and 9 February this year they identified a total of 254 events or statements featuring images of children – to help project the impression of state-building.

Isis also uses children to try to normalise brutality, with the group encouraging children to hold up decapitated heads or play football with them. In the past six months Islamic State propaganda has depicted 12 child killers. A macabre recent video showed a four-year-old British boy apparently detonating a car bomb, killing four alleged spies trapped in the vehicle.

Recruitment of children into Isis frequently involves coercion, according to the report, with abduction being a favoured method. The UN Assistance Mission for Iraq estimates that Isis has abducted between 800 and 900 children between the ages of nine and 15. From August 2014 to June 2015, hundreds of boys, including Yazidis and Turkmens, were forcibly taken from their families in Nineveh and sent to training centres, where boys as young as eight were taught the Qur’an, the use of weapons and combat tactics.

The organisation also uses fear as a recruitment tool, with media outlets within the caliphate issuing statements warning that children who refuse to conform with Isis orders will be flogged, tortured or raped.

Isis has been quick to seize control of the education system in Syria and Iraq, with indoctrination beginning in schools and intensifying in training camps. In the camps, children between the ages of 10 and 15 are instructed in sharia, desensitised to violence, and taught specific skills needed to serve the state and take up jihad.

Boys learn a rigid Islamic State curriculum, from which drawing, philosophy and social studies – described as the “methodology of atheism” – have been removed.

Children memorise verses of the Qur’an and attend jihadi training, which includes shooting, weaponry and martial arts. Girls, known as the “pearls of the caliphate”, are veiled, hidden, confined to the home, and taught to look after the men.

The report’s authors recommend the creation of a commission to protect future generations from radical violence, to help monitor and reintegrate children within the EU who are at risk. According to a spokesperson for the Roméo Dallaire Child Soldiers Initiative, which co-wrote the report, life under Isis is “one of the gravest situations for children on Earth. It is hoped that this report will provide a critical perspective on the plight of these children, that will then create essential reflections for policymakers, child protection agencies, governments, multilateral organisations, and those concerned with ending conflict in Iraq and Syria.”