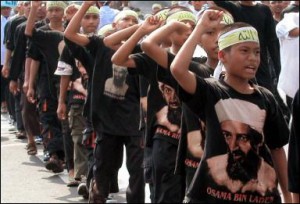 The conflict against the Islamic State (IS) militant group in Syria and Iraq could prove to be the training ground for the next wave of domestic Indonesian bombers, a Jakarta-based terrorism expert says.

Sidney Jones’s comments come as a local documentary seeks to stem the flow of Indonesians heading to Syria, by sharing one former IS recruit’s disappointment of working for the group.

According to Ms Jones, who is the Head of the Institute for Policy Analysis of Conflict, hundreds of Indonesians are known to have already answered the call of IS.

She said that posed a major threat to Indonesia, as the country’s domestic terrorist movement could see a revitalisation upon their return.

“If people did come back with combat experience — the credentials of having fought in Syria and Iraq, renewed ideological equipment, more knowledge about weapon and bomb making and so on — they could revitalise a not very impressive terrorist movement in Indonesia.”

In a disturbing development, Ms Jones said IS was not just looking to young men for recruitment. In fact, its propaganda also targets families.

“[IS] has the added attraction of being a pure Islamic state — a great Islamic experiment that they have the opportunity to take part in and that’s one of the reasons you see families going,” she said.

Former IS recruit shares story of path to terrorism

Those targeted are enticed with all sorts of promises.

Street hawker Junaedi was recruited by Abu Jandal, one of the two most powerful Indonesians in Syria.

Junaedi tells his story in a new film documenting exactly how IS networks radicalise young Indonesians. It was made by Noor Huda Ismail, who has dedicated his life to turning them away from terrorism.

Mr Ismail is in touch with many Indonesians who have joined IS in Syria and some who have returned.

“Abu Jandal promised that Islamic State would pay [Junaedi’s] debts. It means he will receive a salary of maybe $250,” he said.

“Maybe for Australians that is just nothing, but for Indonesians, that’s quite a bit of money you know.”

The reality Junaedi found in Syria was vastly different to what he was promised.

“Before you arrive there you have a different vision of the place,” Junaedi said.

“You think it will be good — that is until you experience it for yourself. I was shocked when I first arrived … there was no electricity.”

Mr Ismail said disillusioned fighters like Junaedi were valuable because they could be used to prevent other Indonesians from joining IS.

“They can say, ‘look, basically what ISIS told you is not right. I was there, it was horrible living out there. Please don’t go’,” he said.

In the last few years, Mr Ismail has watched as local Indonesian terrorism networks have been eclipsed by IS.

“In the past, when the Indonesian police arrest one guy, they can easily track them down because they are linked to one specific group. Now they come from everywhere.”

In 2002, when the Bali bombings rocked Indonesia, Mr Ismail realised that he had lived and grown up with one of the suspects.

“My dad sent me to an Islamic boarding school when I was 12,” he said.

“And the school was founded by the head of Jemaah Islamiyah. So, literally, I shared a room with those Bali bombers when I was 12 for six years.”

Mr Ismail realised if things had gone differently, he too could have continued on a path to terrorism.

“Because of different trajectories, I missed the chance to get a scholarship to study in Pakistan back then Afghanistan,” he said.

“Because I was tainted, and I took a date with the daughter of the founder of the school, I was considered as not devoted enough to pass that test.”

He said the need for deradicalisation in Indonesia was urgent and hopes his documentary will go some way towards meeting that need and making Indonesians think twice about joining IS.

“If we see more Indonesians travelling there, they will eventually come back and then it will create problems in Indonesia,” he said.