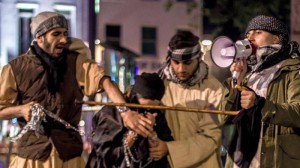 After continuous follow-up and scrutiny, SOHR could document information received from several and reliable sources that “Islamic State” distributed “a sabiyya (a woman as spoils of war or a female captive)” for each IS militant willing to marry and who suffer from impairments due to the clashes and aerial bombardment carried out by the warplanes on IS-held areas in Syria.

SOHR activists followed and documented “distributing the Sabaya (women as spoils of war or female captives)”, where it is sure that “a sabiyya” distributed to each IS militant who lost one of his long parts, suffer from impairment or handicap due to the military operations that have taken place in IS-held areas in Syria.

SOHR also document some details about how they deal with “the Sabaya” and their life, where SOHR had been informed that the operations of “buying and selling the Sabaya” have turned to be trade for IS militants and leaders because that brings to them “substantial amounts of money”, where one of the militants or leaders buy “a sabiyya or several sabaya” , then offering them for sale on the social media and WhatsApp, the sabiyya’s photos, owner and price” are shown. Cross-cutting sources confirmed to SOHR that IS militants and jurists reported to them that “showing the sabiyya’s photos and selling it is halal and that the one who forbids that, so he forbids what Allah Almighty makes it halal.

IS jurists also added that “the intimate parts of the Sabiyya are the same as free women but they are as men’s, so she must cover her body from the shoulders to knees.” Reliable sources could see some women and girls not wearing “the Islamic clothes” where their faces and parts of their bodies are uncovered, and accompanied by IS extremists. Upon enquiry, the answer was, “they are Sabaya and they do not have to cover their bodies like the free women”.

In addition, reliable sources informed SOHR that “Islamic State” do not trust “the Kurdish Sabaya” because they “kill the one who buy them, then they commit suicide”, and that IS puts them in special jails and “not selling, marrying or making them servants at all”, while “IS sells the Yazidi sabaya and other sabaya as wives or servants”. Other sources informed SOHR that “Islamic State” established houses for “free sabaya” in its held areas in Iraq, where the women, who have been freed, have been taken by IS to a dwelling called “the dwelling of the free sabaya”, where the free sabiya lives there as “free women and enter to Islam, she does not have the right to go out of the area fearing of going back to her home and to return to kuffer”.

It is noted that SOHR published in late June, that IS transported 42 “ Yazidi Sabiyya” and other “sabaya” from a house in the city of al- Mayadin to one of its post in the city, where the sources confirmed to SOHR that IS offered them for sale in the post, they were sold them for sums of money between 500- 2000$. Meanehile, the destiny of children brought with them are still unknown.

SOHR also documented in late August in 2014, that IS distributed 300 Yazidi women to its fighters in Syria. The women were kidnapped in Iraq weeks ago on the base of being “Sabaya (women as spoils of war) looted during the war with the infidels”. SOHR documented some case where IS extremists were selling the female abductees to other extremists for 1000$ for each woman. It is said that they become Muslims and they will get married from those militants who paid money in order to get them.

In that time, SOHR documented 27 cases at least of selling and marrying those women by IS militants in the northern countryside of Aleppo and in the two countryside of al Raqqa and al Hasaka.

SOHR had been informed that some Arab and Kurd notables paid money by IS mediators in al Shaddadi area pretending that they want to get married from the Yazidi female abductees as part of circular process for liberating and returning them to their families.