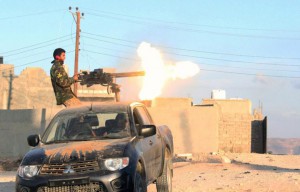 Fifteen people were killed and several injured late Monday in separate clashes in Libya’s eastern city of Benghazi, according to local security sources.

Monday’s clashes took place between the Daesh militant group and forces that support the internationally recognized government based in the eastern city of Tobruk.

Nasser al-Hassi, information officer for the Tobruk government army, told Anadolu Agency that six Libyan soldiers had been killed and several others injured in an attack by Daesh in the town of al-Naoualiya southwest of Benghazi.

Another Libyan army commander, Aghfir Salem, said another nine people had been killed in a separate attack by Daesh in Benghazi’s eastern suburbs.

Since March, dozens of people have been killed by Daesh in the coastal city of Sirte, which fell to the militant group earlier this year, prompting the Tobruk government to appeal to the Cairo-based Arab League for support.

Libya has remained in a state of chaos since the 2011 ouster and death of strongman Muammar Gaddafi. In the four years since, the country’s stark political divisions have produced two rival seats of government respectively based in Tobruk and Tripoli, each of which boasts its own political institutions and military capacities.