You are here: Home / MidEastGulf / Islamic State to withdraw from Damascus within 72 hours 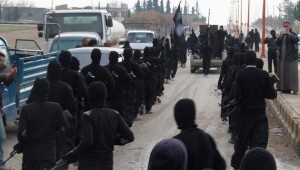 The Islamic State (IS) militant group and the al-Qaida-linked Nusra Front are expected to withdraw from areas under their control in south of the capital Damascus within 72 hours, local al-Watan newspaper reported on Monday.

The IS and Nusra will pull out of the areas of the Palestinian camp of Yarmouk, and the adjacent districts of Hajar al-Aswad, said the newspaper. It added that local militants from the aforementioned areas will fill the void after the withdrawal of the hardline groups.

Al Watan didn’t give details about the destination of the IS and Nusra, but previous reports said those groups will head to the northwestern province of Idlib, a stronghold of the Nusra Front, and the al-Raqqa province, the de facto capital of the IS in northern Syria.

Several truces and evacuation of rebels have taken place recently in Syria, particularly around Damascus, in the latest effort by the government to clear the vicinity of the capital from insurgent groups.

The government concludes such truces by laying tight siege on rebel-held areas to force the rebels to abandon their positions under negotiated deals, largely mediated by the UN.

Al-Watan said Monday that the Syrian army foiled an attack by the al-Qaida-linked Nusra Front and likeminded groups in the town of Kharabo in eastern countryside of Damascus.

The paper added several soldiers died in the attack.