You are here: Home / Senza categoria / Islamic State threatens US with 9/11-style attacks in latest video 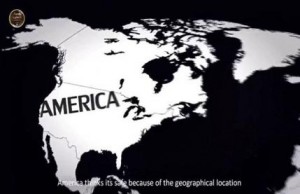 ISIS has released a new propaganda video claiming that there is ‘no safety for any American on the globe’ and that the United States will soon burn in another 9/11 style attack.

The 11 minute-long video, titled, ‘We Will Burn America’ features a series of video clips from disturbing executions, bombings and various other atrocities, all carried out by the Islamic State.

The video features the beheading of US journalist James Foley, as well as several mass beheadings and the horrific burning of Jordanian pilot Muadh al-Kasasbeh.

The ISIS militants go on to describe the death and destruction they foresee for the United States and say, ‘By Allah’s willing, the fear will spread among them again soon.

Text from a clip of the video:

‘America thinks it’s safe because of the geographical location.

‘Thus you see it invades the Muslim lands, and it thinks that the army of the Jihad won’t reach in their lands.

‘But the dream of the American to have safety became a mirage. Today there is no safety for any American on the globe.

The Mujahideen before although they had less resources, attacked New York and bombed the Twin Towers in September Eleven attacks.

That blessed incursion was a fatal blow. All praise is due to Allah, the American economy was shaken.

In such way Americans lived, and by Allah’s willing the fear will spread among them again soon.

Here it’s America now losing billions still to make sure their country is safe. But today, it’s time for payback.

By the grace of Allah, today the mujahideen are much more stronger and they have more rescources. Thus they are able to burn United States again.’