The dreaded Islamic State outfit has threatened a new wave of terror attacks as deadly as the Paris massacre in London, Berlin and Rome in a latest chilling video which shows images of the UK Parliament and Eiffel Tower crashing to the ground. 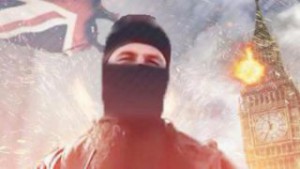 The video shows footage of the Paris and Brussels attacks as well as 9/11 strikes, calling previous massacres a “cautionary message”.

“If it was Paris yesterday… tomorrow it will be London, or Berlin, or Rome. Nations of the cross, this message is for you. Know that your options are few, either you join Islam, or pay tribute, or freeze the war,” warns the video released by the group’s Alwa’ad media arm yesterday.

It also shows other iconic European landmarks such as the Rome’s Coliseum interplayed with footage of executions and beheadings from Syria and Iraq.

Narrated in English with a thick Arab accent, the voiceover says ISIS terrorists carried out the suicide bombings and shootings in Paris to wipe out ‘kuffars’ or non-Muslims, Daily Express reported today.

“The soldiers went out to the ground and street of Paris and killed the kuffars. This invasion was just a cautionary message to the nations of the cross,” it said.

The threat has come a week after British Prime Minister David Cameron warned that ISIS was willing to use “whatever materials they can get their hands on” to attack the West.

Despite its bold proclamations, the ISIS has lost its key positions across Syria.
The group was driven out of Palmyra last week and Russian forces have now entered the city to clear the area.