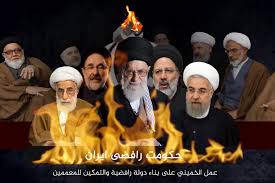 The Islamic State group has issued a short new video in which it threatens the Islamic Republic of Iran and vows to destabilize the country with terrorist attacks, like reported by voanews.com.

The video, released Tuesday, depicts a teenage boy in military uniform who directly looks at the camera and speaks Persian with a bold voice, threatening the regime.

The teenager is introduced as the “Persian Qattadah” in the video, which is the name of a close disciple of Prophet Muhammad.

“We will destroy your land and your home, we will disrupt your security and we will shed your blood into rivers,” the teenager is heard saying in the video.

Iran has not yet reacted to the video. It was produced in similar fashion to other videos released by the terror group in the past.

In late March, IS released a 36-minute, Persian-language video aimed at Iran’s Sunni Muslim minority in which several adults spoke in Persian, but with heavy Baloch and Arabic accents.

The new video portrays a child soldier who speaks fluent Persian with no accent at all, which suggests that the terror group may have made inroads in parts of the country to recruit.

Analysts’ views on the content and purpose of the video were mixed.

Some said IS wanted to exploit Iranian Sunnis, who have long been deprived of their rights.

“Islamic State’s propaganda is falling on fertile ground as Sunnis in Iran are deeply underprivileged and deprived of many of their rights,” Ali Alfoneh, a nonresident senior fellow at Rafik Hariri Center for the Middle East at The Atlantic Council, told VOA.

“It is hardly surprising that the Islamic State is trying to target Iran’s Sunni minority,” Alfoneh added.

Others downplayed the video and viewed it as a desperate move by IS to show that it remains relevant. The terror group has faced numerous defeats on the battlefield in recent months in Iraq and Syria.

“This is an isolated case and depicts a desperate effort by IS to show it is still capable of conducting new attacks,” said Alex Vatanka, a senior analyst at the Washington-based Middle East Institute.

“With less territory under control and shrinking sources of revenue, recruiting new members from Iran, where people, even dissident Sunnis, see less common ground with IS, seems to be shooting in the dark and bears no fruit at all,” Vatanka added.

Alfoneh of the Atlantic Council said he thought that some of Iran’s policies were purposefully marginalizing the country’s Sunni minority from the mainstream, which could drive them closer to extremist groups like IS.

“Iran’s Sunnis are being oppressed, and the Iranian government policy of relating Sunnis to IS and Saudis has not given the desired fruit expected,” he said. “Twin attacks on June 7 committed by Iranian members of IS prove that fact.”

IS militants carried out twin terrorist attacks in early June targeting Iran’s parliament and the shrine of Ayatollah Ruhollah Khomeini, the founder of the Islamic Republic.

The attacks, which IS claimed responsibility for, killed at least 17 people and injured dozens more.

Iran’s mainly Baloch and Kurd Sunni minorities have long accused Tehran of discriminating against them because of their religious views.

Human rights organizations also have talked of mass executions of Sunnis and have urged Iran to lift restrictions on Sunnis, who make up about 9 percent of the country’s population.

Tehran has acknowledged it executed at least 977 people in 2015, which it says was mainly for drug-related crimes.