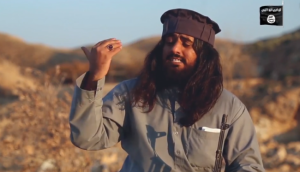 The Islamic State has released a threatening video to Iran in Farsi language, urging an uprising against its rulers through apparently Iranian militants affiliated with the group, like reported by iraqinews.com.

The video, titled “Persia: the Past and the Present,” which started with a glimpse of Persian history, showed fighters belonging to an apparently new division formed by the group, named “Salman al-Farisi”, while practicing with gunfire at a location in Diyala province.

A later part of the video featured the fighters beheading four Iraqi soldiers, presumably Shias, one of whom belonged to Badr Brigades, a prominent Shia paramilitary group fighting IS alongside the Iraqi government troops.

The three fighters were identified in the video with their nom de guerre as Abu Mujahid al-Balushi, Abu Saad al-Ahwazi, Abul Farouq al-Farisi.

A voice commentary describes Iran as “a shelter for apostates and infidels”, and said it backed Houthi rebels in Yemen, established Lebanon’s Shia militia Hezbollah and persecuted Sunnis. another fighter addressing viewers accused Iran of giving protection to Jews on its soil.

Iran has been a generous backer of the Shia-led Iraqi and Syrian governments, as well as Shia militias fighting IS in both countries since the Sunni extremist group emerged in 2014 to proclaim an “Islamic Caliphate”.